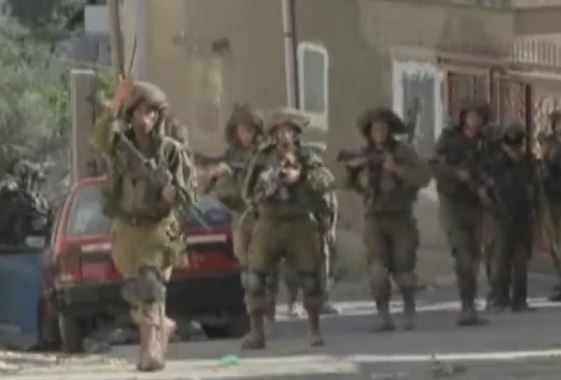 Israeli soldiers invaded, on Thursday morning, the Deheishe refugee camp, south of the West Bank city of Bethlehem, and clashed with local youths; one Palestinian was injured, and many suffered the effects of tear gas inhalation. The army also kidnapped three children in Betunia, near Ramallah; nine Palestinians injured.The soldiers invaded the Deheishe refugee camp from different directions, and stormed the family home of Ahmad Sami al-Ja’fary, before searching it and ransacking its property.

Ahmad was not home during the attack, and the soldiers handed his family a military warrant ordering him to head to the Etzion military base for interrogation.

Soldiers also invaded the home of Jamal and Sami al-Ja’fary, and occupied the rooftop of the family home of Jihad al-Ja’fary, who was shot and killed there by Israeli army fire during dawn hours of February 24 2015. http://www.imemc.org/article/70697

In related news, Israeli soldiers kidnapped three Palestinian children in Betunia town, west of the central West Bank city of Ramallah, and took them to an unknown destination.

Clashes also took between the soldiers and local youths in the town, close to the nearby ‘Ofer Israeli prison; medical sources said nine Palestinians were injured.