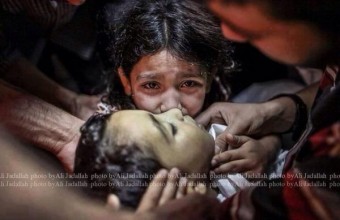 A new report by Defense for Children International-Palestine, titled ‘Operation Protective Edge: A War Waged On Gaza’s Children’, has displayed documented events proving that that Israel deliberately murdered Palestinian children during its last offensive on the Gaza Strip, this past summer.According to the report, the number of children killed in the last summer offensive on Gaza hit 535, a majority of them under the age 12. Another 3,400 children were injured – over 1,000 maimed for life. They need vital medical care unavailable because of Israel’s lawless siege – ongoing aggression by any standard with full US-led Western support.

Operation Protective Edge was the sixth Israeli military offensive on Gaza in the past eight years, and raised the number of children killed in assaults on Gaza to 1,097 since 2006, the Palestinian News Network informs. Between December 2008 and January 2009 Israeli forces killed at least 353 children, as well as a further 33 children in November 2012.

According to the report, Israel considers all civilians legitimate targets. However, international law defines this as a war crime.

DCIP’s report said that ‘2014 was a year that brought violence, fear and loss (to Gaza).’ The Israeli military offensive’ lasting 51 days from early July to late August killed about 530 Palestinian children. Nearly 3,400 other children were wounded – many from illegal terror weapons. Over 2,200 Palestinians died – mostly defenseless civilians.

The report included stories and testimonies from witnesses of the war in Gaza, documenting targeting places that should have been provided children with shelter and safety were not immune from attacks from Israeli forces.

‘Missiles fired from Israeli drones and warplanes, artillery shelling, and shrapnel scattered by explosions killed children in their homes, on the street as they fled from attacks with their families, and as they sought shelter from the bombardment in schools.’

One of many examples affected Rawya Joudeh and four of her five children. An Israeli drone attack murdered them in cold blood – ‘as they played together’ in the family’s Jabalia refugee camp yard.

Around half the number of children Israel killed came from attacks on residential buildings. A nighttime and ground assault on the residential Gaza City Shuja’eyya neighborhood killed 27 children. It injured at least 29 others.

The report looked back at the Israeli military offensive known as Operation Summer Rains, between June 28 and September 30, 2006, around ‘289 Palestinians were killed, of whom 65 per cent were children, and over 1,261 injured in the Gaza Strip, of whom 189 were children.’

Results show that Israeli military ‘incursions and shelling as well as direct military attacks have damaged school and health facilities.’ Nearly eight years later, by simply updating the figures in these statements, the same language could be used in the Secretary-General’s next annual report to detail the situation for Palestinian children in 2015.

Evidence of Israel high crimes in the report was completely overwhelming. It shows repetitive unnaccounted aggression against Palestinian children.

DCIP called on an immdeiate end to the current regime of collective punishment, targeted assassinations, and regular military offensives, the situation for Gaza’s children (and all illegally occupied Palestinians is) guaranteed to further deteriorate.’

Defense for Children International Palestine is an independent, local Palestinian child rights organization based in Ramallah dedicated to defending and promoting the rights of children living in the West Bank, including East Jerusalem, and the Gaza Strip. For over 20 years, DCIP investigated, documented and exposed grave human rights violations against children; held Israeli and Palestinian authorities accountable to universal human rights principles; and advocated at the international and national levels to advance access to justice and protection for children. They also provide direct legal aid to children in distress.