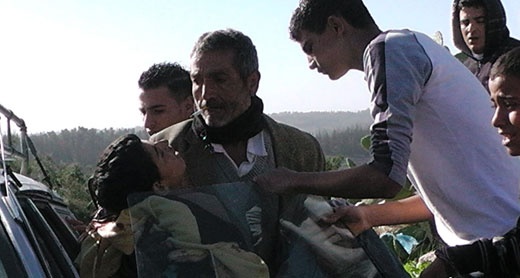 On the 5th of January, 2013, sixteen-year-old Samir ‘Awad was killed by Israeli soldiers near the apartheid wall in the occupied West Bank village of Budrus. According to Israeli-based human rights group, B’Tselem, Samir was shot three times, although he posed no danger to anyone.

That morning, following his last examination before school’s mid-year break, Samir went with a few friends to the walled area south-west of Budrus, about 300 meters from the school. B’Tselem field researcher Iyad Hadad gathered testimony from several of the teenagers, one of whom watched from a distance. According to their testimonies, the boys planned to throw stones at military patrols along the fence, as teenagers in the area often do. They said that when they approached the wall, they saw that one of its gates was open. They thought that, because of this, soldiers must be nearby and tried to find them.

Military sources told the media that Israeli soldiers of the 71st Armored Corps Battalion were concealed in a nearby ambush. B’Tselem’s inquiry showed that the soldiers were on the side of the wall area facing Budrus. According to B’Tselem, when Samir was between the barbed-wire fence and the main fence, four soldiers appeared and the other teenagers fled the scene.

At this point, Samir tried to run away, apparently, but was caught between the two fences. The soldiers called for him to stop and fired in the air. Then they shot at his leg while he was trying to flee. He was wounded and fell to the ground, but, when he tried to continue running, the soldiers shot him again. He was wounded by a bullet in the back and a bullet to the head.

According to Hebrew media reports, the initial investigation by the Israeli military found that ‘Awad was shot in contravention of open-fire regulations, which permit soldiers to use live ammunition only in cases of real and immediate mortal danger.

The reports also stated that there were contradictions among the soldiers’ stories.

The Military Police Investigations Unit has long since completed all aspects of the investigation into the incident, yet, although more than two years have now passed since then, only recently was a decision reached in regard to the case.

On Tuesday, April 14, the Israeli State Attorney’s Office notified the High Court of Justice (HCJ) that, in the case of Palestinian youth Samir ‘Awad, it had decided (“subject to a hearing and to the end of privilege proceedings”) to file an indictment for the minor offense of committing “a reckless and negligent act using a firearm”.

Furthermore, the state’s response did not note which of the soldiers involved was to stand trial.

This is a new low in Israeli authorities’ disregard for the lives of Palestinians in the Occupied Territories, B’Tselem further reports. The State Attorney’s Office has sent security forces in the Occupied Territories a clear message: if you kill an unarmed Palestinian who poses no threat, we will do everything to cover it up and ensure impunity. Killing a wounded, fleeing youth who posed no threat by shooting him in the back is not a “reckless and negligent act”.

The disparity between the grave action and the minor offense is incomprehensible and outrageous.

It is also not clear why it took two years and a petition to the HCJ for the authorities to decide to serve this indictment. B’Tselem asks: Had the petition not been filed, would the Military Advocate General’s (MAG’s) Corps have continued to drag its feet? When, exactly, were the authorities planning to end this sorry affair?