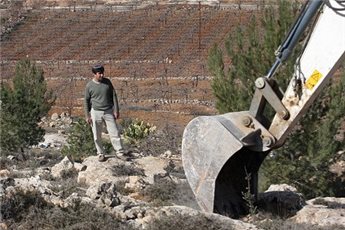 Israeli settlers have stolen large amounts of nutrient-rich soil belonging to Palestinians in the Salfit-district village of Kafr ad Dik, witnesses reported Sunday.Witnesses said, according to Ma’an News Agency, that Israeli bulldozers moved huge piles of the fertile soil from Kafr ad Dik into the illegal Israeli settlement of Lishim.

According to researcher Khaled Maali, the red soil was of an extremely high quality.

He said it would now be used in settlers’ gardens and also to grow trees in land bordering exclusive settler routes that Israeli military forces have seized from Palestinians as a ‘buffer zone’ for the roads.

In 2012, Israeli newspaper Haaretz reported that Israeli police were aware of settlers stealing Palestinian soil, but did nothing about it.

An Israeli police official quoted in the report said there was no formal way of enforcing laws against this kind of theft.

Kafr ad Dik town has been exposed to Israeli confiscation and razing of lands, as well as the demolition of homes and water wells, according to the Applied Research Institute of Jerusalem.

More than 85 percent of the village’s 15,500 dunams are classified Area C under the Oslo Accord, giving Israel full civil and military authority, ARIJ says.

Of those lands, nearly 1,300 dunams have been confiscated for the construction of settlements, which are illegal under international law.

Land has also been confiscated for the construction of Israeli bypass road no. 446, which passes through village lands for 4km and divides the village’s north and south.

Approximately 75m have been seized on each side of the road so as to create a ‘buffer zone.’