Weakening and Discrediting the UN: Mission of Israeli QGOs 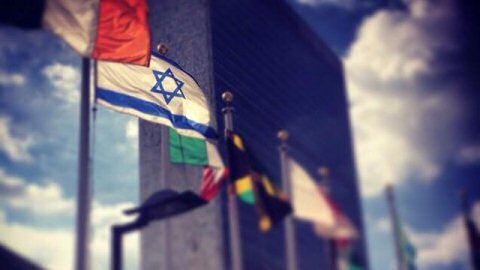 QGOs, along with Israeli and American diplomats, have managed to intimidate and neutralize the UN as a foundation of support for the justifiable grievances of the Palestinian people. In so doing, rather than overdoing its emphasis on Israeli violations of human rights and international law, the UN has increasingly allowed itself to be used by geopolitical actors to shield Israel from criticism and to deflect such stronger initiatives as sanctions designed to produce a just and sustainable peace for the two peoples.[Prefatory Note: This post is the full text of my presentation at an excellent conference “The Israeli Lobby: Is it good for US? Is it Good for Israel?” National Press Club, Washington, D.C., April 10, 2015; the conference was sponsored and organized by the editorial leadership of the magazine Washington Report on Middle East Affairs, which brings together some of the best writing on the Israel/Palestine struggle, as well as covering other regional issues. I encourage readers of this blog to look at the full conference either at the YouTube website or the audio recording at http://www.israellobbyus.org Although there were many illuminating presentations during the day, and I would call particular attention to the memorable remarks of two highly informed Israelis, Gideon Levy and Miko Peled. The tacit conspiracy of media silence has been well described in a release prepared by Washington Report;]

There are no better texts for assessing the damage done to the role and reputation of the UN by the Israeli Lobby than to consider Secretary of State John Kerry’s recent statements boasting about the U.S. success in protecting Israel from criticisms arising from its non-fulfillment of responsibilities under international law and as a member of the United Nations. It should be understood that the lobby does not act in a vacuum, and its leverage is greatly enhanced in global settings to the considerable extent that its priorities overlap with the strategic and economic interests of the United States in the Middle East.

Despite the tensions with the White House associated with Netanyahu’s March speech to Congress, Kerry proudly informed an ABC TV news broadcast: “We have intervened on Israel’s behalf..a couple of hundred times in over 75 different fora.” [“This Week,” Feb. 28, 2015]. And then when addressing the Human Rights Council Kerry included a statement that could just as well been drafted by AIPAC or Israel’s ambassador to the UN: “It must be said that the HRC’s obsession with Israel actually risks undermining the credibility of the entire organization.” And further, “we will oppose any effort by any group or participant in the UN system to arbitrarily and regularly delegitimize or isolate Israel, not just in the HRC but wherever it occurs.” [Remarks, Palais des Nations, Geneva, March 2, 2015] What is striking about these kinds of statements by our highest ranking government officials dealing with foreign policy is the disconnect between these reassurances of unconditional support and Israel’s record of persistent disregard of its obligation under international law and with respect to the authority of the UN. In addressing an AIPAC gathering a few weeks ago, Representative Lindsay Graham curried favor by telling the audience that as chair of the Senate Appropriations Committee, “I’m gonna put the UN on notice” that he would go after its funding if the Organization takes any steps to ‘marginalize’ Israel.

During my six years as UN Special Rapporteur for Occupied Palestine I had the opportunity to observe the manner in which a group of international and national so-called NGOs (non-governmental organizations) that are closely aligned with Israel give priority to deflecting criticisms of Israel and discrediting with the temerity to offer critical assessments of Israel’s conduct. I say ‘so-called’ because it is more revealing and accurate to regard these political actors as ‘quasi-government orgnaizations’ rather than NGOs. These covertly aligned entities now hide behind the NGO label to claim a civil society identity for themselves, but in practice they devote their energies and secure their funding because of their single-minded dedication and dogged defense of a particular government’s interests, in this instance those of Israel.

–with regard to personal attacks, a reliance on repeated defamatory attacks on a particular person being targeted, as biased and even anti-Semitic whenever such a person is addressing some aspect of Israeli policy or is sympathetically reporting on Palestinian grievances. Coupled with this kind of personal attack is an avoidance of the substantive aspects with respect to whether the criticisms or grievances are well grounded in international law and human rights law. The content of these toxic attacks, at least in my case, focused on a distorted presentation of my views on a variety of issues that were made in settings other than the UN and generally did not even pertain to the Israel-Palestine conflict. The intended effect was to shift attention from the message containing the issues about which the UN has a responsibility to consider upon to a controversy about whether the messenger is tainted. With incredible persistence, UN Watch the most aggressive of the QGOs, exclusively used the opportunity of ‘interactive dialogue’ in Geneva sessions of the HRC to give voice to their denunciation of my character and activities. Afterwards UN Watch circulated in the form of an organizational letter these defamatory attacks to prominent international personalities, including high-ranking civil servants in the UN itself, such as the UN Secretary General, the High Commissioner for Human Rights, and a variety of ambassadors of countries friendly to Israel.

Characteristically, the letter ended with a demand that I be dismissed from my post as Special Rapporteur.