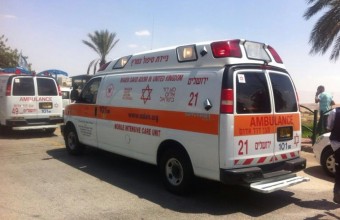 An Israeli man stabbed a Palestinian worker at a construction site north of Tel Aviv on Monday, Israeli police and media reported.The victim, a Palestinian worker for the Herzliya Municipality, told police that a man with a Russian accent shouted ‘Death to Arabs’ before stabbing him in the shoulder.

The worker was transferred to hospital for treatment.

According to Ma’an, Israeli police are searching for the suspect, who fled the scene.

Anti-Palestinian attacks in Israel are frequent and often involve the desecration of holy sites in addition to physical assaults.

In February, suspected Jewish extremists set fire to part of a Christian seminary in East Jerusalem’s Old City and sprayed ‘Jesus is a son of a whore’ and ‘Redemption of Zion’ on the walls.

A day earlier, extremist Jewish settlers set fire to a mosque in the southern West Bank town of al-Jaba and sprayed racist slogans calling for killing Arabs and Muslims on the walls in Hebrew.