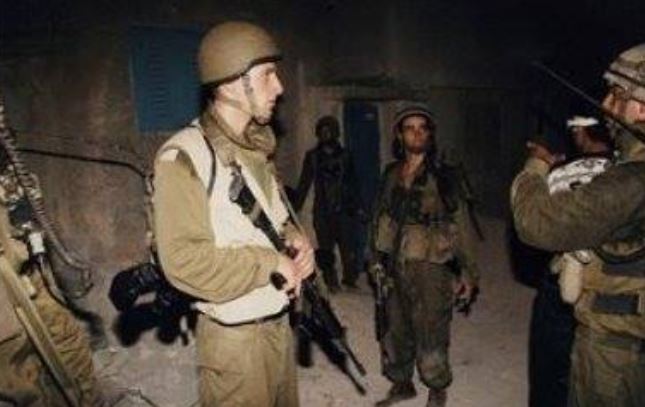 Israeli soldiers invaded, on Monday at dawn, several Palestinian communities in the West Bank different parts of the West Bank, and kidnapped twelve Palestinians, including four children. Soldiers stormed a telecommunications company in Hebron, while Israeli extremists prevented a Bethlehem farmer from entering his olive orchard. Media sources in Hebron, in the southern part of the West Bank, said the soldiers invaded several neighborhoods, including the in Old City, and kidnapped three Palestinians after interrogating their families and ransacking their property.

The sources said the army kidnapped Yazan Yosri Abu Sneina, 22, and two brothers identified as Ashraf, 22, and Sharaf Shukri al-Fakhouri. The soldiers beat the two brothers before kidnapping them.

Also, soldiers invaded the al-Jinan Telecommunications Company in the Al-Manara Junction area, in the center of Hebron city, and violently searched it while interrogating the employees.

In addition, army invaded Beit Fajjar town, south of the West Bank city of Bethlehem, and kidnapped four Palestinians, after searching and ransacking their homes.

Furthermore, soldiers and settlers invaded a Palestinian orchard in the al-Khader town, south of Bethlehem, and prevented a farmer from plowing his land.

Ahmad Salah, coordinator of the Popular Committee against the Wall and Settlements in al-Khader, said the soldiers, and armed guards of Efrat illegal settlement, invaded the 10-Dunam olive orchard, and ordered the owner, Emad Ahmad Da’doa’, to stop plowing his land.

Salah said the Da’doa’ owns the orchard, and have all legal deeds, yet, the soldiers are claiming it is a “state land” – the family filed an appeal against an Israeli decision to illegally annex its land, but the Israeli court is yet to respond.

Israel recently started bulldozing sections of the orchard to build new illegal settlement units to expand the Efrat, an issue that would surround al-Khader with a chain of settlements and outposts, and prevent any natural growth of the town.

Soldiers also invaded Jalboun and Sielet al-Harethiyya nearby villages, and conducted live fire drills near homes in the al-Jalama village, east of Jenin.