VIDEO: The Story of Nadeem Nowarah 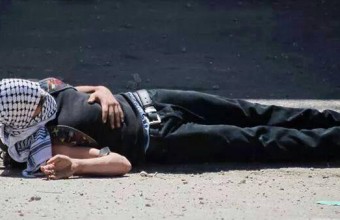 Last year, during clashes on the 66th Nakba day, May 15 2014, Nadeem Nowarah (17) was shot dead by an Israeli soldier, in cold blood, during a protest in front of Ofer prison near Ramallah.Nadeem was shot by a sniper, with a bullet which penetrated his chest, and landed in his backpack.

The video displays the suffering from a humanitarian point of view, and is narrated by Nadeem’s father, and human rights activists.

The killer of Nadeem was identified by video footage. However, he is still free and unaccounted, according to the PNN.