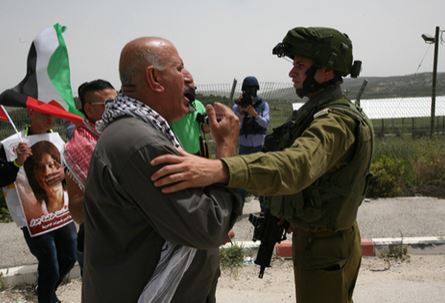 Israeli soldiers attacked, Monday, nonviolent protesters, marching in solidarity with the Palestinian detainees, near the Huwwara roadblock, south of the northern West Bank city of Nablus.Khaled Mansour, a local organizer and a member of the leftist Palestinian People Party (PPP), said the protest comes in solidarity with all detainees, held by Israel, and face constant harassment, abuse and ongoing violations.

Mansour added that Israel must stop its ongoing abduction of Palestinians, and must instantly release all detainees.

He also stated that various political and social parties in the Nablus district organized the protest, adding that the soldiers used excessive force, and fired gas bombs in addition to concussion grenades.

The Detainees In Numbers:

– 6,500 Palestinians still imprisoned by Israel, among them are;
1. 480 detainees sentenced to at least one life term.
2. 200 children.
3. 24 women, including four children.
4. 14 legislators and one government minister.
5. 30 detainees held before the Oslo Accord of 1993.
6. 16 detainees who have been imprisoned for more than 25 years, including Karim Younis and Maher Younis, who were kidnapped 33 years ago.
7. 85 former detainees, who were released under the Shalit Prisoner Swap Agreement, and were kidnapped again, afterwards; most of them served at least 20 years before the Shalit deal.

Prisoners Day Report on Palestinian Detainees, Their Sufferings and Their Plight
http://www.imemc.org/article/71255

Abbas: “Releasing All Detainees Is The Foundation Of Any Future Peace Deal”
http://www.imemc.org/article/71261