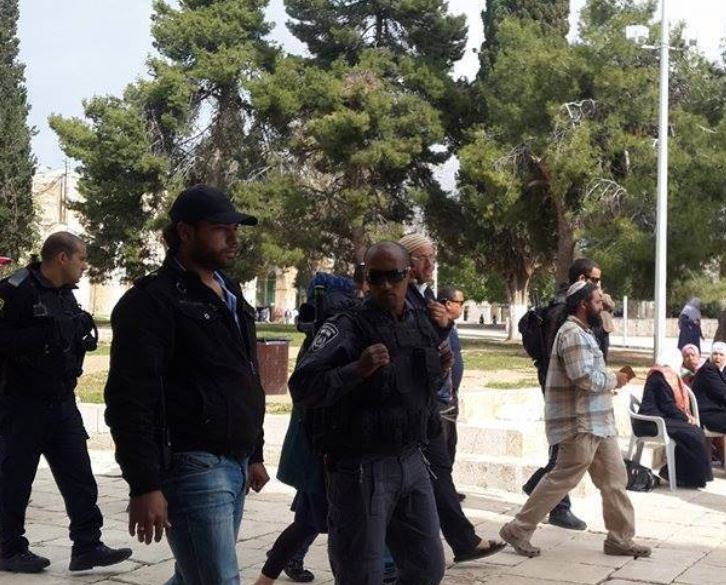 As dozens of Israeli extremists stormed the yards of the Al-Aqsa Mosque, in occupied Jerusalem, chanting and raising Israeli flags, and trying to raise the flags on the mosque, Israeli soldiers kidnapped a young Palestinian man.Media sources said the soldiers kidnapped Omar Odeh, from Qalansawe, in the Southern Triangle Area.

Odeh was beaten and cuffed, before being moved to an Israeli police station in Jerusalem’s Old City.

The abduction took place after scores of Israeli fanatics stormed the Al-Aqsa Mosque compound, through the al-Magharba gate, on Wednesday morning, and conducted provocative tours under heavy police and army protection.

Massive Processions are also planned to take place on Thursday starting at 7:30 in the morning, until 6 in the evening, the WAFA Palestinian News Agency said.

Various fanatic groups, and far right-wing politicians, intend to raise Israeli flags not only around the Al-Aqsa mosque but also inside the holy site.

Although the provocative marches have been ongoing for a long while, yet; the main processions are planned for Wednesday and Thursday, with the declared slogan “The Temple Is In Our Hands.”

Media announcements made by a number of fanatic Israeli groups, far-right leaders, states the main event includes “special prayers from the Al-Aqsa, and a mourning of fallen Israelis, in addition to using loud speakers to provide testimonies.”

WAFA said an audio segment would be played on loud speakers documenting the voice of General Rabbi Shlomo Goren, the Chaplin of the Israeli army who, on June 7 1967, sounded the Shofar at the Western Wall, and said, “the Temple Mount is in our hands…” referring to occupying the Al-Aqsa Mosque and East Jerusalem.

Israel started the Memorial Day celebration Wednesday by sounding the two-minute siren at 11 before noon, following with a speech by Israeli Prime Minister Benjamin Netanyahu.