Four Palestinians Kidnapped In Jenin, One In Jerusalem 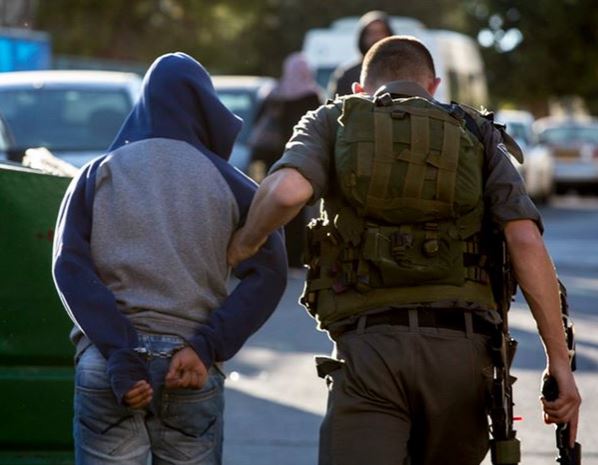 Israeli soldiers kidnapped, earlier on Monday, four Palestinians in the northern West Bank district of Jenin, and one Palestinian in occupied Jerusalem. Clashes and home invasions have been reported.The soldiers kidnapped a resident, identified as Aman Tamim Hardan, 27, from Jenin city, after stopping him on a roadblock close to the Shavei Shomron illegal colony, near Jenin.

The soldiers also kidnapped Anas Abdul-Raouf ‘Abady, 23, from Toura village, while trying to cross the Barta’a roadblock, near Jenin.

A third Palestinian, identified as Mohammad Mahmoud Qabaha, 32, also from Toura, was kidnapped on the military roadblock, installed on the main entrance of Om ar-Reehan village, in Ya’bad, south of Jenin.

Also in Jenin, soldiers invaded the homes of three former political prisoners, searched their properties, and threatened to arrest them “should they continue their political activities.”

The three have been identified as Hamza, 43, his brother Anas Qa’qour, 28, and Mustafa al-Wazni.

Clashes took place between the soldiers and local youths, in Zayed Junction area, and Wad Ezzeddin, in Jenin; the soldiers fired concussion grenades and rubber-coated metal bullets, no injuries were reported.

In related news, soldiers kidnapped a Palestinian worker, in occupied Jerusalem, allegedly for entering and working in the city without a permit.

The Kidnapped Palestinian has been identified as Nadim Adam Issa, 28 years of age, from the al-Khader town, south of Bethlehem.

The Israeli army conducts daily invasions, and arrests, in different parts of the occupied territories.

Most of the abductions take place after the soldiers storm and ransack homes, while many arrests take place on roadblocks.