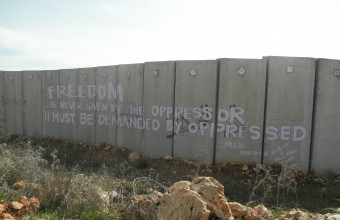 Israeli forces have, at the time of this report, fired at least 45 tear gas grenades towards the village of Ni’lin, west of Ramallah. Many suffer from severe inhalation.Residents of Ni’lin, with international activists, have been staging weekly demonstrations against a nearby expansion of the Israeli West Bank barrier, the PNN reports. It has been estimated that the completion of the barrier will remove ⅓ of Ni’lin’s land.

Protests recently began to take palce against the building on village farmland within a small stretch of the barrier which will place 2,500 dunams (250 hectares) of Ni’lin farmland on the Israeli side, an area of the occupied West Bank which has been used to build several illegal Jewish-only settlements, including Hashmoniim.

Two other settlements, Nili and Na’ale, have also been built to the east of the village and the people of Ni’lin fear that they will soon be surrounded and cut off. All settlements in the occupied territories are illegal under international law.

‘Our land will be divided into small cantons,’ said Salah Khawaja before the latest Israeli military operations. Khawaja, age 40, is one of the village protest organizers, and works as an administrator in a medical organization.

‘People in this area were totally dependent on agriculture but now they are imposing a transfer and migration policy on us in a very harsh way. Everyone can see the quantity and quality of land they are going to confiscate,’ he said.

In 1948, at the time of the creation of the state of Israel, the village had around 57,000 dunams of land, according to Khwaja. It now consists of around 10,000 dunams and will have even fewer when the latest part of the barrier is finished.

Also of interest: 05/01/15 IMEMC Report: The Plight of Africa’s Exiles in Israel