Carter: ‘We will push to apply Fateh and Hamas agreements’ 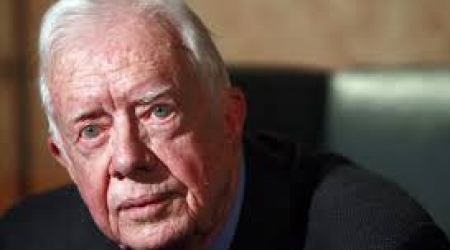 Former US President Jimmy Carter says that he, along with a non-governmental organization which describes itself as a group of ‘independent global leaders working together for peace and human rights’, known as The Elders, will exert great effort to accomplish the reconciliation that Hamas and Fateh agreed upon last April.Carter discussed with defacto Palestinian President, Mahmoud Abbas, the possibility of achieving the recent accord between the two movements, after he headed a visit with the group in Ramallah, on Saturday.

He had also held a session with Abbas to discuss a number of main issues, including the current and future situation of the Palestinian people.

According to Al Ray Palestinian Media Agency, Carter expressed his hope to hold the Palestinian election in all districts, including occupied Jerusalem, the West Bank and the Gaza Strip, stressing that it would be an essential step for Palestinians.

Abbas informed Carter with the latest developments of situations in the Palestinian territories, and the political process in regard to the Israelis’ refusal to abide by international resolutions.

Carter also pointed to the need of accelerating the reconstruction of the Gaza Strip, and urged donor countries to meet their pledges adopted at last year’s Sharm el-Sheikh conference, to help the Palestinian government with the process, and to put an end to the suffering of Gaza’s people.

It was planned that the former U.S President Jimmy Carter would pay a visit to Gaza on Thursday, but he canceled the visit without announcing the reasons.