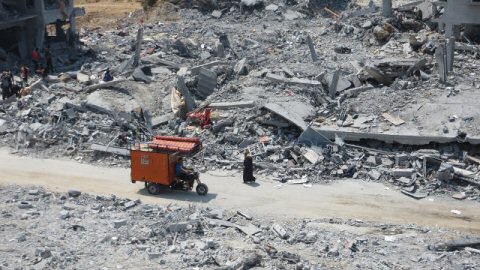 Israel’s military command perhaps pushes for escalation in order to increase the army’s budget, claims a military budget officer in an anonymous Facebook posting. “Wars, operations, exceptional events, they were our way to close gaps in the budget and even build up a reserve for the coming years…Facts are traitors which incite against the army and the state”.Posting anonymously on Facebook, the officer claims he was compelled to write after reading an interview with a senior military official about Israel’s NIS 70 billion defence budget.

“This interview is full of nauseating smugness of the officer, who is trying to again peddle the same lies and threats that if the army is not given more and more billions, he will be forced, no choice, to kill soldiers. That’s how it is, if you don’t pay, you will bury (the dead).

Indirectly, of course, because if there is no money we will have to again send soldiers in tin cans into Gaza, but the subtext is clear.

Yet amongst all the usual lies, he notes that the budget requested by the army for Operation Protective Edge also serves the ongoing budget of the army…”

The officer adds that “As a budget officer, wars, operations, exceptional events, they were our way to close gaps in the budget and even build up a reserve for the coming years.

In the (Gaza) disengagement, for example, the army succeeded in blackmailing so much money from the state that already in July we managed to close our contracts going forward and we sought where to shove the remaining money. All sorts of projects that weren’t approved in the past, building auditoriums, gyms, offices, everything that required money and a lot of it.

It’s difficult for me to explain the excitement that could be felt in the hallways of the budget department every time that such an event began. A few qassam rockets made everyone put on combat uniforms and pull from the attic the presentations and files which show, with a disporportionate exaggeration, how much money we’ve already spent on the operation, that we need it to be returned quickly or the army would collapse.

For every ten soldiers placed to guard a post, we demanded a budget for their uniforms, the food, the ammunitions they are liable to use, heavy combat equipment, depreciation for tanks that would maybe come out of the storerooms, pension for those soldiers for that day and everything possible to put in the presentation with a number beside it. True, the army is supposed to fund the daily existence of these soldiers from its budget, because if there was no operation they would be eating in any event, but facts are traitors which incite against the army and the state.

Occasionally I would feel that the senior command would get so excited from the mountains of money expected to arrive, I had the feeling, God forbid this is just a feeling, of course, that perhaps they pushed for escalation. Only a feeling…”

Speaking to the Haaretz newspaper, the Israeli army spokesperson responded that: “This is an individual statement that does not reflect the numerous approval and supervision processes that exist for the defense budget. All of the funds transferred to the army pass through stringent approval procedures in the Foreign Affairs and Defense Committee and the cabinet, and implementation is supervised by the comptroller general division in the finance ministry.”