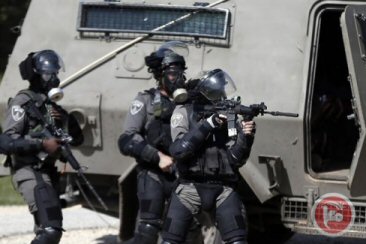 Israeli authorities have closed an investigation into a policeman who shot dead a young Palestinian with Israeli citizenship during an arrest operation in November, the justice ministry said on Monday.’The department for investigating the police has decided, according to the opinion of the state attorney, to close the case of the shooting by a riot policeman which caused the death of Kheir Hamdan,’ it said in a statement.

‘This is by reason of lack of guilt.’

The shooting of Hamdan, 22, in the Galilee village of Kufr Kana, sparked major protests in which police clashed with angry youths who threw stones, burned tires and waved Palestinian flags.

Hamdan was shot when he attacked a police vehicle with a knife after officers arrested a relative, AFP reports.
Police allege the officer fired warning shots and ordered Hamdan to drop the knife, aiming directly at him when he refused to obey.

Relatives say he was killed ‘in cold blood,’ with CCTV images contradicting the official version.
In the video he is seen banging on a police van window with a knife before starting to run off.
Then a uniformed officer gets out of the vehicle’s back door and fires his handgun at Hamdan, who falls to the ground.

Officers then drag his body into the vehicle by one arm.

The justice ministry said the decision to wind up the inquiry follows exhaustive investigation.

‘It included confiscation and analysis of video from security cameras, gathering of evidence from the scene of the incident, carrying out reconstructions, obtaining expert opinions and taking testimony from those involved and from witnesses,’ the statement said.

It said Hamdan was shot in the hip by a policeman who had to take a quick decision at a moment of danger to the life of a colleague.

‘The incident lasted a matter of seconds during which the deceased attacked the police vehicle in a frenzy,’ it added.

MP Yousef Jabareen, a Palestinian with Israeli citizenship, called the decision ‘outrageous and scandalous.’
‘But it is not surprising,’ he said in a statement. ‘It comes as a direct continuation of the trigger-happy approach towards Arab citizens.’

Israel’s Palestinian minority, which constitutes 17.5 percent of an overall Israeli population of around eight million, has long complained of being marginalized.