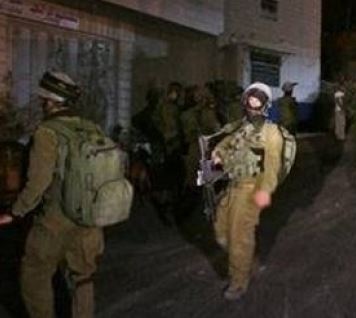 Israeli soldiers invaded several Palestinian communities in the occupied West Bank, and kidnapped four Palestinians, after searching a number of homes and tailor shop; the army also installed roadblocks.Media sources in the northern West Bank city of Jenin have reported that the soldiers invaded and violently searched several homes, and kidnaped two Palestinians identified as Majd Amjad ‘Orouq, 23, from the city, and Ayman Sami ar-Rekh, from the Jenin refugee camp.

The soldiers also searched the homes of Majdi ‘Arqawi, and the homes of Fiadi, Yousef, Mohammad and Ahmad Nimir Abu Qandil, in addition to their father’s home, and interrogated the families.

The residents said the soldiers surrounded their properties, and detonated the front doors, before searching and ransacking them.

The soldiers also confiscated the ID cards of Mahmoud and his brother Ahmad Shalabi.

In addition, soldiers kidnapped an elderly Palestinian man, on the al-Karama border crossing, while heading back home from Jordan.

The Palestinian, Salim Abed Sabah, 63 years of age, was held and interrogated, before the soldiers kidnapped him, and took him to the ‘Ofer Israeli prison.

Furthermore, at least 25 soldiers also invaded a neighborhood, near the Orthodox Club, in Beit Jala city, in the northwest of Bethlehem, searched and ransacked, homes belonging to members of the Yaghmour family.

Eyewitnesses said each family was forced in one room in their homes, while the soldiers photographed the building from the inside and outside.

On Tuesday morning, several military vehicles invaded the al-Bathan village, northeast of the northern West Bank city of Nablus, and installed a roadblock on the road leading to Tallouza village, before searching dozens of cars and interrogating the residents while inspecting their ID cards.