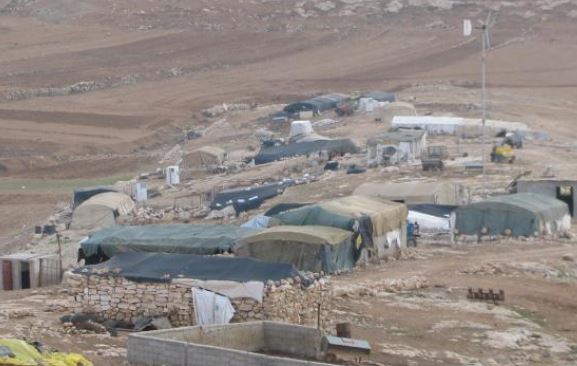 An Israeli Court ruled Monday on the removal of Susiya Bedouin village, in Masafer Yatta area, south of the southern West Bank city of Hebron, after colonists of the illegal Susya settlement, demanded the removal of the Palestinian enclave.Coordinator of the Popular and National Committee in southern Hebron Rateb Jabour told the WAFA News agency that the Israeli decision could be enforced at any given moment, rendering dozens of resident homeless.

He added that the head of the Susiya Village Council Jihad Nawaj’a, received an official Israeli order informing him of the intention to remove the village.

Nawaj’a stated that the Susiya has been subject to dozens of violations and assaults by Israeli soldiers and fanatic colonizers.

“Our village is a historic area; Israel wants to remove us to control it,” he added, “There are many Islamic and Roman archeological sites here.”

The villagers have been constantly suffering, and literally fighting for their very existence, since Israel started the construction of Susya colony in 1983 on privately owned lands belonging to five Palestinian families from Yatta.

The villagers were forcibly removed from their village in 1986, and relocated to the current location, yet again, are facing the same fate.

Removing the village means displacing at least 50 families, and the illegal annexation of hundreds of Dunams of private Palestinian lands.

Nawaj’a said the residents have all deeds proving ownership of their lands, but Israel continues to displace them, in addition to constantly preventing them from having any access to running water, electricity and other basic services.

Several Palestinian, Israel and international human rights groups frequently warned of the Israel plans, and said Tel Aviv is planning to destroy 13 Palestinian villages in Hebron, under the pretext of “being located in military training zones.”

Removing the 13 communities would lead to the displacement of around 1.650 persons.