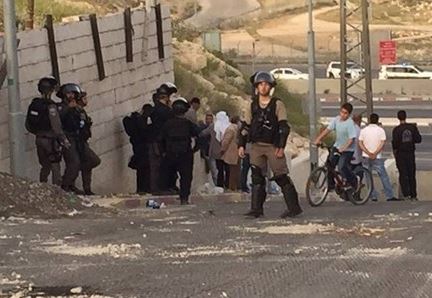 Israeli soldiers placed, Monday, concrete blocks surrounding a Palestinian land Israel intends to illegally confiscate, in Silwan town, in occupied Jerusalem, leading to clashes between the army and local youths.Member of the Follow-Up Committee in Silwan, Mohammad Abu al-Hummus, stated that several military vehicles invaded the town, before the soldiers started placing concrete blocks around more than a Dunam of Palestinian land.

He said Israel wants to use the land for a project belonging to the Hadassah Hospital, and that “placing the concrete blocks seems to be a preemptive measure to foil appeals filed by the residents against the decision.”

Abu al-Hummus added that the land in question is more than a Dunam (0.247 Acres) that Israel decided to confiscate in the 1970’s for “public use,” but started in recent years attempting to use it for the benefit of the medical center.

The invasion, and placing the concrete blocks, led to clashes between dozens of local youths and the Israeli soldiers; no injuries were reported.

The clashes largely took place near the main entrance of the town, while dozens of soldiers surrounded it.