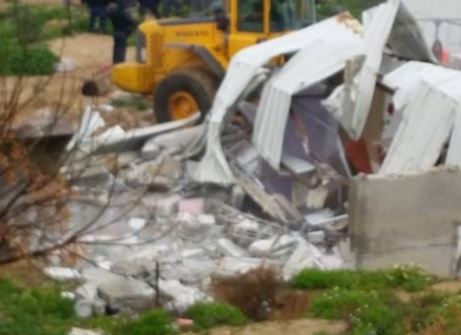 He added that sixteen person inhabit the targeted homes, and will be rendered homeless should Israel carry out the destruction of their properties.

The Civil Administration informed the families they have until May 18 to file appeals against the demolition orders.

Bedouin villages in the occupied West Bank are subject to constant violations, displacement and assaults, while the military also repeatedly forces them out of the homes and lands, to conduct military training in the Jordan Valley.

Dozens of Bedouin communities in the occupied Negev are also subject to frequent demolition and displacement, as Israeli does not recognize them, although they have been there before Israel was established in the historic land of Palestine in 1948.

One of those villages in the Negev is the al-Araqib village that was destroyed by the army more than eighty-two times. http://www.imemc.org/article/70990

The demolitions are part of the so-called “Negev Development Plan” that aims at destroying Bedouin communities, and relocating them in certain area, so that Israeli can build illegal settlements and shopping centers.