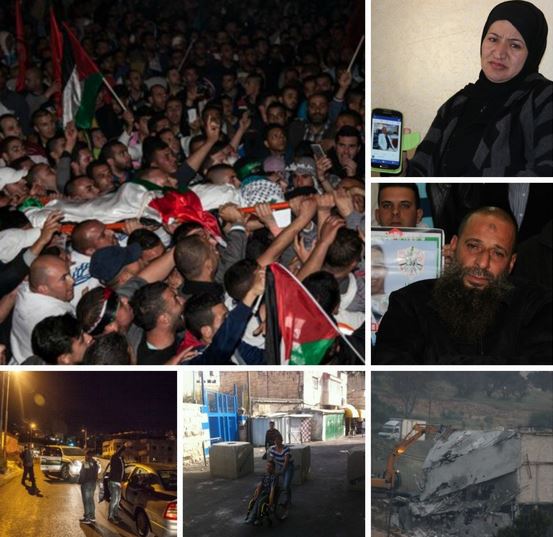 The Wadi Hilweh Information Center in Silwan (Silwanic), in occupied Jerusalem, published a report documenting the Israeli violations against the Jerusalemite Palestinians in April, and revealed that the soldiers killed one teen, kidnapped 120, demolished two structures, and escalated the attacks on the Al-Aqsa Mosque.Silwanic said the soldiers shot and killed, on Saturday April 25, Ali Sa’id Abu Ghannam, 16 years of age, while trying to cross a military roadblock in occupied Jerusalem.

The soldiers claimed he attempted to stab a soldier, but eyewitnesses refuted the allegation. http://www.imemc.org/article/71348

Israel held the body of the slain teen, and tried to place preconditions by attempting to force the family to pay a high fine, and limit the number of Palestinian who would participate in the funeral ceremony, but the family refused the Israeli demands. http://www.imemc.org/article/71355

Lawyers representing the family demanded Israel to hand them a copy of surveillance tape on the military roadblock, but the army never released the video.

The death of Abu Ghannam led to clashes between the Palestinians and the soldiers in different parts of occupied Jerusalem.

Silwanic reported that the soldiers kidnapped 120 Palestinians in different neighborhoods, villages and towns in Jerusalem, including 14 women, and 40 children; the youngest is Ahmad Ehad az-Za’tary, 7 years of age.

Undercover Soldiers also kidnapped Mohammad Mahdi az-Za’tary, 12; both Ehab and Mohammad were kidnapped near their homes, and were interrogated for extended hours, and were denied access to legal representation, food or water, and were not allowed even to sleep.

Silwanic stated that most of the arrests were carried out by the army in Silwan town, the Old City, at-Tour, al-‘Isawiyya, Sheikh Jarrah and Jabal al-Mokabber.

Furthermore, fanatic Israeli groups, accompanied by the police, carried out dozens of invasions into the courtyards of the Al-Aqsa Mosque, and conducted repeated violations and attacks against Muslim worshipers, while the police kidnapped and interrogated many Palestinians, including women and children.

The Israeli police also attacked two mosque guards, and issued orders denying 35 Palestinians access to the Al-Aqsa Mosque for periods that range between 10 days and 6 months.

Among the Palestinians who received such orders, after being detained and interrogated, are 10 women, two elderly men, two children, and two employees of the Islamic Waqf Department. Furthermore, the soldiers verbally informed a 10-year-old child that she is denied access to the Mosque.

The soldiers also continued to withhold the ID cards of young men, and women of all ages, before allowing them to enter the mosque.

The soldiers also handed several families demolitions notices of their homes and structures in different parts of occupied Jerusalem.

In addition, Israeli fanatics attacked a child, identified as Sa’id Radi Ad-Doo, 14, while riding his bicycle in the Old City, causing several cuts and bruises to various parts of his body.

The army also placed concrete blocks on the eastern entrance of the al-‘Isawiyya town, closed the Za’im roadblock gate, forcing the villagers to take alternate, longer routes, to go to school or work.

Silwanic stated that scores of Palestinians have been shot and injured by Israeli army fire in April, including a young man, identified as Suleiman Tarbi, 20, who lost his left eye after being shot with a rubber-coated metal bullet in the al-‘Isawiyya town. http://www.imemc.org/article/71257