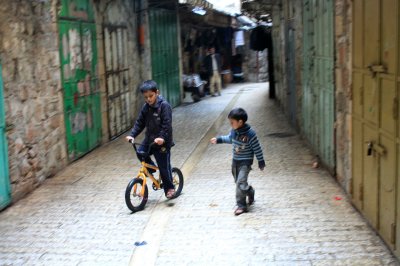 A group of right-wing Israeli men in the old city of Hebron chased down and violently assaulted four children ages 4 – 10 and their mother. The family was walking home when they were attacked.The assault on the young children took place following a weekly ‘tour’ of Hebron led by right-wing fanatic settlers, that is usually accompanied by violence against the indigenous Palestinian population of the city.

According to the Christian Peacemaker Team stationed in Hebron, ‘Every Saturday, Israeli and foreign tourists gather in Hebron’s Old City for a tour. On this tour, visitors are given a false and racist history of Hebron that denies the legacy of Muslims and Jews living together for centuries. The tour is accompanied by dozens of Israeli soldiers and Border Police, who ID check and detain Palestinians…Between December 2014 and March 19, 2015, soldiers invaded 35 homes, mostly to use these families’ rooftops as look-out posts. Settlers and tourists frequently chant as they walk through Palestinian neighborhoods, and sometimes yell threats at local children.’

In Saturday’s attack, Mirvat Abu Tuama and her children Hazim, 10, Rahaf, 8, Lujayn, 5, and Liyan, 4, were walking home when a group of armed men, right-wing Israeli Jewish settlers, began chasing them and shouting at them, then attacking them physically.

This is at least the third attack in the past week by Israeli settlers against Palestinian civilians. These include an attack earlier this week on a South African delegation visiting the old city of Hebron.

On Saturday, four settlers, one of them armed, harassed a Palestinian walking with his son through the Palestinian-owned Humra valley in the southern West Bank’s South Hebron Hills.

And Friday, two Palestinians, a six-year-old child and his sister, were harassed and chased by settlers as they walked to their home in the South Hebron Hills village of Tuba. The settlers screamed at and chased them, frightening the Palestinians, who ran away.

Groups like the Christian Peacemaker Teams, who witness the daily harassment, say that these daily incidents of ongoing settler harassment render Palestinian life in the South Hebron Hills and other places in the West Bank’s Area C, over which Israel has full control, extremely difficult for the indigenous Palestinian population.

The last report by the Christian Peacemaker Teams stated that, ‘Since 1967, radical right-wing Israeli settlers have occupied a number of buildings and formed illegal settlements inside Hebron’s Old City. These settlements house at most a few hundred settlers and are guarded by an immense regime of checkpoints, road closures, guard towers, military outposts, and military patrols.

Because settlers refuse to interact with the local Palestinian population (in fact, a major goal of the military occupation is the slow starvation of the Old City economy and people), the settlements and accompanying occupation forces are financially unsustainable.’