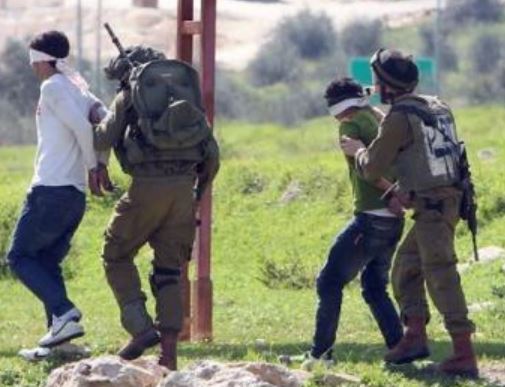 Israeli soldiers invaded, on Sunday at dawn, several communities in the West Bank districts of Hebron, Bethlehem and Ramallah, searched and ransacked a number of homes and kidnapped six Palestinians.Media sources in Bethlehem said several army vehicles invaded Teqoua’ town, east of the city, and kidnapped Sami ‘Ali Sabah, 23 years of age, after breaking into his home and searching it, causing property damage.

The soldiers also invaded Doha town, west of Bethlehem, invaded a home, and handed ‘Amro Jamil Abu Srour a military order for interrogation in the Gush Etzion military and security base.

In addition, a number of military vehicles invaded Ras Efteiss and Al-Manara areas, in Bethlehem, before breaking into and searching a home belonging to resident ‘Omar Habib, and a shop belonging to ‘Adel ‘Atiq.

Soldiers also invaded Hebron city, in the southern part of the West Bank, and the nearby towns of Yatta and Doura, before kidnapping two Palestinians identified as Ahmad Rashed al-Joneidi, 21, and Nassereddin Fayyad Sahana.

In Ramallah, soldiers invaded Turmus ‘Ayya town, and kidnapped three Palestinians, in addition to handing a fourth resident a military order for interrogation.

Media sources in Ramallah said the soldiers kidnapped Malek Ziad, Tamer Mershid and Abdullah Ahmad al-Basha, all from Silwad nearby town, and handed resident Thalji Majdi Hammad, 21, a military warrant for interrogation, after breaking into his home and searching it.

Late on Saturday at night, a group of Israeli extremists attacked several Palestinians and their property, in Tal Romeida area, in the center of Hebron city.

Resident Emad Abu Shamsiyya said several settlers from the Ramat Yeshai illegal outpost, installed on Palestinian property, attacked homes and lands in addition to throwing stones on a number of residents while cursing and shouting at them.

Abu Shamsiyya added that Israeli soldiers, deployed in the area, witnessed the attack but did not attempt to stop or remove the assailants.

Some of the Palestinians who were attacked have been identified as Mirvat Abu Rmeila and her children Rahaf, Lajeen, Lian and Hazem, in addition to members of Abu Markhiyya family.