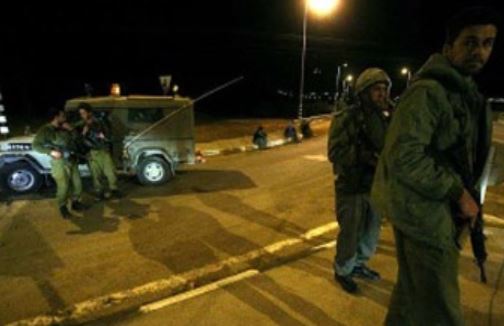 Mousa, from Ras Efteis area in Bethlehem, headed to the Etzion base after the soldiers invaded his home, searched it, and handed him the interrogation order.

The sources added that the army invaded Husan town, west of Bethlehem, broke into and searched a number of homes, and handed Dia’ Mohammad Zaghoul, 20, and Mohammad Kamal Zaghoul, 30, military warrants for interrogation, also in Etzion.

In addition, dozens of soldiers conducted military drills in Wad al-Jouz and Farsh al-Hawa, in the southern West Bank district of Hebron.

In occupied Jerusalem, soldiers kidnapped a Palestinian child, identified as Yousef al-Hazeena, 14, near the Sahera Gate, in the Old City. Eyewitnesses said the soldiers took the child to the Police station in the nearby Salah Eddin area.

On Monday at dawn, soldiers kidnapped three Palestinians, including a child, after breaking into their homes in Jerusalem.

The three have been identified as Mofid Es’id, 15 years of age, Hotheifa Shreiteh, 20, and Fahed Shalabi, 22.