Army To Demolish A Barn Near Bethlehem, Orders Halt Of Home Constructions 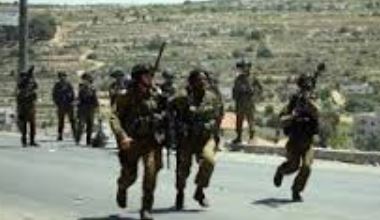 Israeli soldiers invaded, on Wednesday at dawn, Beit Eskarya village, surrounded by the Gush Etzion settlement bloc, south of Bethlehem, handed a demolition order of a barn, and handed three families military orders to stop the construction of their homes.Head of the Beit Eskarya village Council, Mohammad Ibrahim ‘Atallah, told the WAFA News Agency that the soldiers handed a demolition order to resident Mohammad As’ad Sa’ad, targeting his 60/square-meter barn.

The resident has seven days to file an appeal against the Israeli decision, but was not provided with any further information.

In addition, soldiers handed three residents orders to stop the construction of their homes in the village.

It is worth mentioning that the Civil Administration Office, run by the Israeli army in the West Bank, recently issued similar orders against 34 under construction homes, and structures, in the village.

The villagers filed appeals against the orders, but never received any response from the Israeli side.

On Wednesday morning, soldiers invaded Be’er al-Basha village, near Jenin, and searched the home of Abdul-Ghani Midhat, before interrogating him and his family.

The soldiers also invaded al-‘Arqa village, west of Jenin, and conducted searches in its neighborhoods.