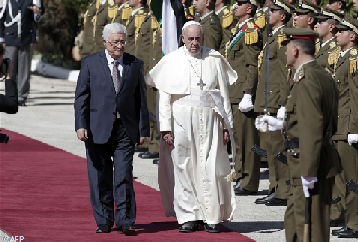 Negotiations about the treaty have been underway for years. The treaty began taking shape during a bilateral meeting between representatives of the Vatican and the PLO and PA in the interim Palestinian capital Ramallah on January 30, 2013.

The negotiations in 2013 were headed by the Palestinian Foreign Minister Dr. Riad al-Malki and the Vatican’s Msgr. Ettore Balesteror, the Vatican’s under-secretary for the Holy Sea’s Relations with States.

The treaty was completed on Wednesday, May 15, 2015 and reflects a sea-change in the Holy Sea’s relations with the PLO and the Palestinian State. The Vatican also welcomed the U.N. General Assembly’s 2012 decision to recognize Palestine.

Palestinian Authority President Mahmoud Abbas is expected to visit Pope Francis at the Vatican on Saturday, before the canonization of two new Catholic Saints from the Holy Land on Sunday.

The Vatican has repeatedly expressed its position against Israeli government’s attempts to suppress both the Christian and the Muslim cultural and religious heritage in Israel and the occupied Palestinian territories. The PLO, for its part, repeatedly warned against what is described in terms such as “the colonization of Christmas”. Pope Francis visited Palestine one year ago, in May 2014.