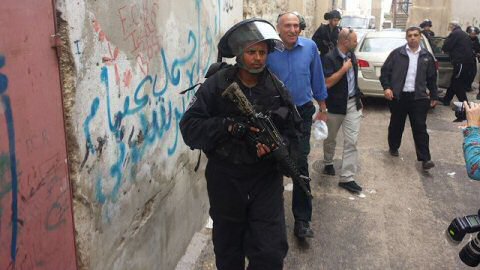 MK Moti Yogev touring a settlement in East Jerusalem’s Silwan/Photo: Moti Yogev Facebook
Knesset Member Moti Yogev (Jewish Home) toured the East Jerusalem neighbourhood of Silwan Thursday morning. The tour comes as Palestinians commemorate 67 years to the Nakba.Heavily guarded by border police and special units for the protection of VIPs, Yogev wrote on his Facebook page that this was a “’usual’ walking tour through the Yemenite village in East Jerusalem”. The Yemenite village is a reference to property in the area owned by Yemenite Jews prior to the 1948 Middle East war and on the basis of which Israeli courts have permitted the takeover of several Palestinian-owned homes in Silwan.

Yogev himself is a settler, living in the Jerusalem area settlement of Dolev.

The settler population in Silwan has more than doubled to some 700 persons in recent months as settlers occupied 23 houses in the neighbourhood in September while in the following month an additional two buildings were taken over. In March Israeli settlers took over a Palestinian-owned property in Silwan, as well as two plots of land belonging to two Palestinian families.

Fakhri Abu Diab, a member of Silwan’s popular committee, told the Palestinian news agency Ma’an that over 62 percent of homes in Silwan are under the threat of demolition, after orders were ‘randomly’ distributed as ‘collective punishment,’ which he says aims to displace the residents and control the neighbourhood.

Abu Diab added that some houses which were taken over by settlers last October were built without permits, but none of them received demolition orders.

Israeli Col. (res.) Shauli Arieli, a member of the Geneva Initiative and the Council for Peace and Security, told Haaretz that the presence of Israeli settlers in the heart of East Jerusalem neighbourhoods, does not have a demographic impact. “If we look at the past 20 years, the overall Israeli population has not exceeded 3,000 in a Palestinian population of 120,000”, he stated. “This cannot have a demographic effect.

This statement ignores, however, the deep impact that Israeli settlements have on East Jerusalem communities. Silwan itself is facing a process of “Hebron-isation”, in which a small number of settlers scattered across Silwan and protected by police and security forces are beginning to control the movement, services and freedoms in the neighbourhood, leading to high levels of tension, violence and further Palestinian displacement.

Israel’s new Agriculture Minister, Uri Ariel, also from the Jewish Home party, is reportedly considering a move to the Jewish settlement in Silwan.

Silwan has long been a target of Israeli settler groups.