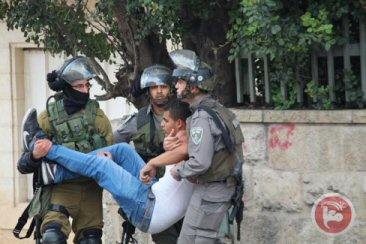 A Palestinian youth was injured with a rubber-coated steel bullet during clashes with Israeli soldiers, at the northern entrance of Bethlehem, Thursday.Medical sources said, according to Ma’an, that a youth was injured in the leg by Israeli fire before he was detained and taken to an unidentified location during clashes which erupted in the Rachel Tomb’s area of Bethlehem.

Violent clashes between youths and Israeli soldiers were sparked near the northern entrance of Bethlehem, as youths threw rocks and Molotov cocktails at an Israeli military tower.

The incident came ahead of Nakba Day, when Palestinians commemorate the exodus of hundreds of thousands of people (more than 760,000 Palestinians — estimated today to number more than 7 million, with their descendants) who fled or were expelled from their homes during the creation of the Israeli state.

Last year, Israeli forces shot and killed two unarmed Palestinian teenagers during a rally marking the 66th anniversary of the Nakba outside of the Ofer detention center near Ramallah
Muhammad Audah Abu al-Thahir, 15, and Nadim Siyam Nuwarah, 17, were both shot in the chest by Israeli forces with live ammunition.

Israeli security sources denied responsibility or the teens’ deaths despite eye witnesses and video evidence of the incident, however an autopsy of Nadim Nowarah‘s body later showed the youth had been hit by Israeli forces.

The injured children were taken to a hospital for treatment, while Israeli forces detained six Palestinian children, all under 10 years of age, and took them to the nearby Psagot settlement, locals told Ma’an.
Israeli forces had reportedly set up an ambush for the students prior to the clashes, locals added.

In Beit Lahyia town, in the northern part of the Gaza Strip, at least 50 Palestinian civilians were reported injured on Thursday afternoon ,when an Israeli missile exploded near residents homes.

Army To Demolish A Barn Near Bethlehem, Orders Halt Of Home Constructions