A Red Carpet in Gaza (VIDEO) 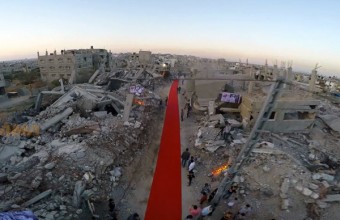 In eastern Gaza City, among ruins and memories of war and destruction, a red carpet was laid out for a film festival on human rights. The event was held amidst rubble in the Shuja’eyya neighborhood, where some 100 Palestinians died in last year’s Gaza war.The Karama (‘Dignity’ in Arabic) Human Rights Film Festival was the first of its kind to ever be held in Gaza – and the chosen location was just the “right place” to hold such an event, according to organizer Saud Aburamadan.

“When we were looking for locations to screen the films we arrived in Shuja’eyya in eastern Gaza City, a large part of which was turned to rubble. We stood there next to the destroyed mosque, surrounded by destroyed homes in every direction, and became clear that it was the right place to hold a film festival focused on human rights,” Aburamadan told +972 Magazine, according to the PNN.

“For us, red is first and foremost the color of so much blood that was spilled here this summer. The blood of women, men and children,” Aburamadan said.

Hundreds of residents showed up to the festival on opening night, along with others from different parts of Gaza.

Pictures from the event, which screened documentaries outside, showed a full house. Every available chair was taken, while others stood on mounds of rubble to get a view of the films being showcased. Some were shown watching the films from the windows of their houses.

Aburamadan stressed that the setting was a rare one for Gaza, which hasn’t had a single movie theater since the First Intifada.

“It was 9:30pm and the place was full of light. You have to understand, Shuja’eyya has lived in darkness for the past eight months. The infrastructure was destroyed. People have been living in darkness, in candle light. This festival brought normalcy back for a moment. It brought daylight.”

The Karama Human Rights Film Festival, which ran from May 12-14, consisted of 180 films from countries including Syria, Iraq, Egypt, Jordan, and Russia. Twenty-eight of those were screened over the three-day event.

The video was made by Lama film, an independent production company in Gaza.