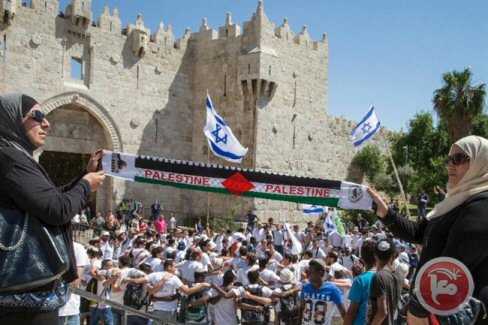 Israeli nationalists and police clashed with Palestinians in occupied East Jerusalem on Sunday, as crowds of Jewish hardliners marched across the city to mark the 48th anniversary of its capture.Known as Jerusalem Day, the anniversary marks the seizure in the 1967 Six-Day War and later annexation of East Jerusalem in a move never recognized by the international community.

According to AFP, police said two officers were wounded by Palestinian stone-throwers and at least five Palestinians were arrested near the walled Old City’s Damascus Gate.

The demonstrators were dispersed by baton-wielding police, some on horseback.

A police statement said that in one incident ‘several dozen Muslims scuffled with a group of Jews’.

The Palestinian Red Crescent told Ma’an News Agency that 29 Palestinians were injured and received medical attention, with seven taken to hospital. Two of those hospitalized were hit with rubber-coated bullets in the eye and one was attacked with rifle butts.

Police would not say how many jubilant Zionists descended on the Old City’s Muslim Quarter on their way to pray at the Western Wall Jewish holy site, only that ‘large crowds’ were expected.

‘They are coming here with the support of an extremist government that paid for their buses,’ a Palestinian woman, Muna Barbar, told AFP outside Damascus Gate.

Palestinian residents of the Old City were forced to closed their stories and homes in preparation for the march, as thestreets were crowded with right-wing Israelis performing flag dances and chanting in the streets.

‘This rally marks a new occupation of Jerusalem every year. It is a painful and tough day for us with Israeli flags waved across the city which is turned into a military barracks and we the indigenous residents feel like aliens,’ Abu Rami, who lives in the Old City, told Ma’an.

Israeli leaders have repeatedly vowed that the city will never again be split, calling it their ‘eternal, indivisible’ capital.

‘Jerusalem has always been the capital of the Jewish people alone and not of any other people,’ Prime Minister Benjamin Netanyahu said at an official Jerusalem Day ceremony.

‘A divided Jerusalem is a past memory: the future belongs to a complete Jerusalem which will not be divided again.’

Jerusalem Day is marked by a series of state ceremonies and an annual march through western Jerusalem and into the east side, which is predominantly attended by nationalist hardliners.

Every year, police deploy in strength to secure the march, which frequently provokes clashes.

This year, two non-governmental organisations appealed to the Israeli High Court to change the route so the march would not pass through the Muslim Quarter.

But last week, the court rejected the appeal, noting it did so ‘with a heavy heart’.

In their ruling, the justices stressed there should be ‘zero tolerance’ of anyone involved in violence, and that police should arrest anyone chanting ‘death to Arabs’.

Spokesman Micky Rosenfeld said ‘thousands of police’ were in and around the Old City.

Spokeswoman Luba Samri said both uniformed and undercover officers were on the streets.

‘The police will show zero tolerance to any display of physical or verbal violence, will act with every means at its disposal against anyone disturbing the peace or rioting, who will be prosecuted to the full extent of the law,’ she said.

Leftist groups, including members of the Meretz party’s youth wing, held a counter-demonstration outside city hall to protest against what it called the ‘march of hate’.

An AFP journalist said about 100 people took part amid a large police presence and there was no trouble.

One participating group, the anti-racism movement Tag Meir, said the annual march had become ‘a focus for extremist groups’ and was routinely accompanied by ‘racist slurs and insults, destruction of property and physical violence against the Palestinian residents of Jerusalem’.

‘This year we say a loud and clear ‘No to the violence, the hatred and the incitement’ which threaten the delicate fabric of daily life in Jerusalem,’ it said.

The group said its supporters would walk through the Muslim Quarter giving flowers to residents as a gesture of peace and coexistence.

Tag Meir was one of two NGOs which unsuccessfully petitioned the Supreme Court to change the route of the march.

Later Sunday, Netanyahu was to join President Reuven Rivlin for a ceremony on Ammunition Hill in East Jerusalem, a former Jordanian military post that saw some of the bloodiest fighting of the 1967 war.

Today, some 200,000 Israelis live in 15 settlement neighborhoods in East Jerusalem alongside a Palestinian population of 310,000.