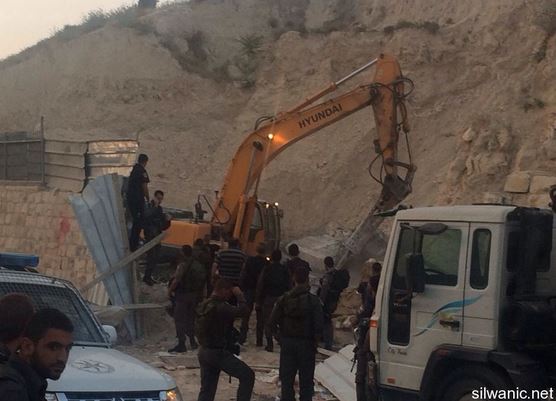 Israeli soldiers invaded, on Tuesday at dawn, Ein al-Louza neighborhood, in Silwan town of occupied East Jerusalem, and demolished three Palestinian stores belonging to a Palestinian from the town. The Wadi Hilweh Information Center in Silwan (Silwanic) has reported that dozens of soldiers, police officers and undercover units invaded Silwan, approximately at 4 at dawn, and surrounded Ein al-Louza neighborhood.

Silwanic added that the soldiers closed all roads leading to the neighborhood, prevented the Palestinians from entering or leaving it, and demolished three stores belonging as Anis Karama.

Soldiers also assaulted Karama as he was trying to reach his stores, causing various cuts and bruises, and proceeded to demolish his property.

Karama said he finished the construction of his three stores nearly two months ago, and that he was still preparing to furnish them.

The total size of the demolished properties is 200 square/meters.

He told Silwanic that he had some tools, gravel and bricks in his stores, and that the soldiers did not allow him to remove them.