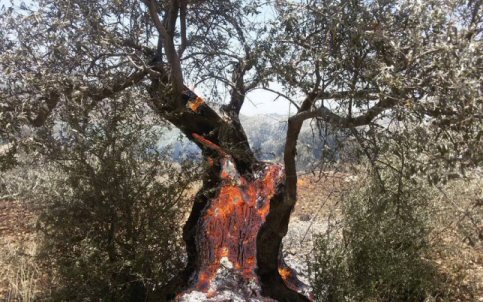 Israeli settlers, Wednesday morning, burned down 90 olive trees in Sarta town, near the central West Bank city of Salfit. Eyewitnesses and farmers from the town said, according to the PNN, that Israeli occupation fire trucks and vehicles arrived to the scene, but did not interfere.

The witnesses added that fingers are pointing, again, toward Israeli settlers, since the town is annexed to the bypass road used regularly by settlers. It is also located between the two settlements of Brukin and Ariel.

Journalist and researcher Khaled Ma’ali said that the olive trees recently have been repeatedly targeted by settlers, causing the damage of thousands of trees in several areas.

On Sunday, settlers from Azfar and Bani Kadim, near Shyoukh village, East Hebron, uprooted or stole about 800 olive trees.

According to a report by the PLO international relations department, occupation forces and settlers cut down and destroyed more than 755 olive trees in the month of April alone.