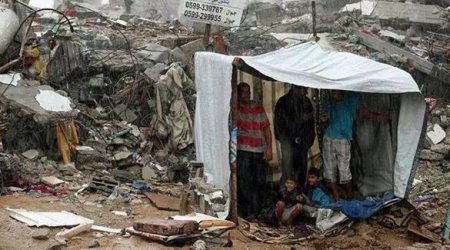 The Euromid Observer held a media conference, on Wednesday, highlighting the consequences of economic siege on Gaza which has now lasted eight years. A United Nations (UN) envoy warned about Israeli settlement activities in the occupied Palestinian territories, saying that the Israeli move is a major causes of instability in the Middle East.’It has been nine months since Israel agreed to a ceasefire that ended its third and most massive military offensive against the 1.8 million residents of the Gaza Strip. However, despite promises by Israel to loosen its nine-year blockade, by Egypt to facilitate further negotiations and by the international community to fund the massive reconstruction needed, none of those promises have been kept,’ the Euromid Observer stated, according to Al Ray Palestinian Media Agency.

The report stated that the Israeli army continues to regularly shoot at fishermen, or confiscate their boats, when they merely are trying to make a living. In April alone, 15 shooting incidents, including one that ended in injury and property damage, were documented.

The report estimated the cost of relief, recovery and reconstruction due to last summer’s war is $4 billion, and international donors pledged $3.5 billion for Gaza’s reconstruction, but only $954 million had been disbursed as of early April.

‘It’s not surprising, then, UNRWA has suspended its cash-assistance program for repairs and rent due to lack of funds, and that the Israeli organization Gisha reports that of the 5 million tons of construction materials required, only 9 percent of that total has actually entered Gaza,’ Euromid commented.

The observer blamed Egypt, who has joined Israel as Gaza’s jailers, pointing to the 2014 annual statistics of the Gaza Interior Ministry that reported that Rafah crossing was closed for 66 percent of the time. That trend has continued. On April 19, the ministry noted that the Rafah crossing had been closed for 100 days since the beginning of 2015, marking the longest closure since 2009.

‘The consequences are predictable. Unemployment has soared to 43 percent, and according to the International Monetary Fund, the Strip’s gross domestic product plunged 24 percent in the third quarter of 2014. This, is an economy that already was on life support,’ Euromid added.

The Euro-Mediterranean Human Rights Monitor concluded the report with urgent calls on the international community force Israel to end its blockade in addition to other demands for help the steadfastness Palestinians.

World Bulletin further reports, via Al Ray, that UN Special Coordinator for the so-called ‘Middle East Peace Process’, Nickolay Mladenov, raised concerns about the illegal settlement activities by the Israeli regime in the occupied West Bank including East al-Quds (Jerusalem) during a session of the UN Security Council, on Tuesday.

More than half a million Israelis live in over 120 settlements built since Israel’s occupation of the Palestinian territories of the West Bank, including East al-Quds (Jerusalem), in 1967.

The UN envoy said that the 15-member council must have “no illusions about the impact of these unilateral actions” by Israel on destabilizing the situation in the occupied territories and in the whole region.

The UN envoy warned about the repercussions of the continuation of tensions in the Palestinian territories, saying the conflict should be settled in order to avoid instability in the region.

“This hard-earned belief in peace and negotiations must not be allowed to wither away,” he demanded, referring to efforts to establish peace in the Palestinian territories through negotiations between Israeli and Palestinian authorities.

He warned that failure to establish peace in the occupied territories ‘can further destabilize the Middle East for decades.”

He further referred to the Israeli onslaught on the besieged Gaza Strip and the continuation of the Israeli blockade on the territory as one of the developments harming peace and security in the region. On July 7, 2014, Israel launched a 50-day war on Gaza, in which over 2,130 Palestinians lost their lives and some 11,000 others were injured.

About 1,500 buildings and structures were also demolished during the Israeli offensive. Many Gazans remain homeless as a result of the war.

The Gaza Strip has been under an Egyptian-backed Israeli economic blockade since June 2007.

“No one can remain untouched by the scale of devastation, the slow pace of reconstruction, and the vast needs to rebuild lives and livelihoods” in the besieged Gaza Strip, Mladenov said, stressing that people in the blockaded area remain “desperate and angry” at the isolation imposed by the ongoing blockade on the territory, at the closure of the Rafah border crossing, and with donors for “not honouring their financial commitments for reconstruction.”

“There is a clear moral and humanitarian imperative not just for the United Nations and the international community, but primarily for the Israeli and Palestinian authorities to prevent the implosion of Gaza,” he stressed.

Mladenov further referred to the large number of Syrian refugees in Lebanon and the spillover of the Syrian crisis on Lebanon, calling on the international community to increase and expedite support for Lebanon.
Syria has been grappling with a deadly crisis since March 2011.

Mladenov concluded that the growing tensions and “a vicious tide of terror and extremism” in the Middle East indicate that “peace cannot be achieved through violence, but at the negotiating table.”

He further warned about the dire consequences of unabated conflicts in the region, saying that the UN should step up efforts to establish peace in the Middle East. 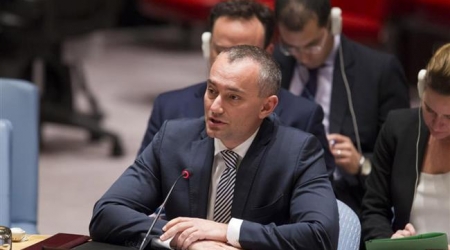