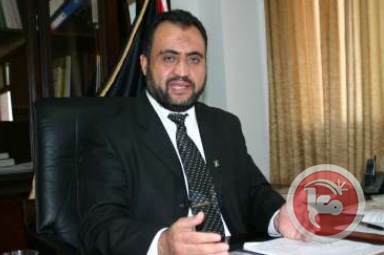 Israeli authorities released, on Thursday, the former Palestinian minister of prisoners affairs Wasfi Qabha after 10 months in detention, the Ahrar Center for Prisoners and Human Rights said. Jailed Palestinian legislator Khalida Jarrar is to released on bail, if an Israeli military court has its way.Israel had detained Qabha on June 15, 2014, following the kidnapping and killing of three Israeli settlers in Hebron and transferred him to administrative detention.

According to Ma’an News Agency, Qabha was assaulted during detention and while he was being transferred to the Megiddo jail and then to the Hadarim solitary confinement before being sentenced to 10 months in prison.

The former minister was released via the Jubara checkpoint near Tulkarem; he was previously detained several times.

Qabha’s brother, Amjad Qabha, has been in Israeli custody for 12 years and is sentenced to 18 years.

34 to remain in jail

PNN reports that an Israeli military judge ruled, also on Thursday, that jailed Palestinian legislator Khalida Jarrar, a well-known West Bank firebrand, should be released on bail, but ordered her held for at least three more days pending a possible appeal.

Jarrar, 52, has been a vocal campaigner for pursuing war crimes charges against Israel at the International Criminal Court, where Palestinian membership went into effect April 1.

Jarrar was arrested from her West Bank home on April 2, in what her husband said was a pre-dawn raid by dozens of masked Israeli soldiers who climbed over courtyard walls and broke down the door.

She has been charged with inciting to violence and with membership in the Popular Front for the Liberation of Palestine, a small leftist PLO faction banned by Israel.

Jarrar, a mother of two daughters pursuing advanced degrees in Canada, shuffled in leg shackles into the makeshift courtroom on the Ofer military base Thursday. She told reporters that her detention is meant to silence her, but that ‘we will continue our struggle until we end this occupation.’

Her case has drawn widespread attention, in part because of the timing of the arrest. Defense lawyer Mahmoud Hassan said the charges stem from speeches and public appearances going back two and three years, raising questions about why she is being prosecuted now.

‘It’s clear this is a political trial,’ he said. In her three decades of activism, Jarrar was only held once before by Israel, for a month in 1989, her husband said.

Jarrar is the only woman among 16 Palestinian legislators currently held by Israel, including 13 from the Islamic militant group Hamas, uprising leader Marwan Barghouti from the mainstream Fatah movement and PFLP chief Ahmed Saadat, imprisoned for his role in the killing of an Israeli Cabinet minister a decade ago.

The military judge, Maj. Haim Belilty, read the charges Thursday, saying Jarrar participated in marches in which she incited to violence and encouraged the kidnapping of Israeli soldiers.

Belilty said she should be freed on 20,000 shekels ($5,000) bail, but gave the prosecutor three days for a possible appeal. 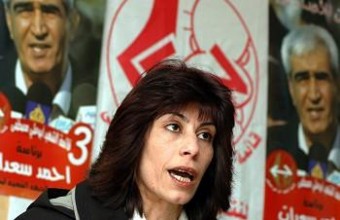