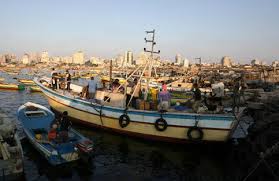 Palestinian medical sources have reported, on Monday evening, that a third Palestinian fisherman was shot and injured by Israeli Navy fire, in Palestinian waters in Rafah, in the southern part of the Gaza Strip. Two fishers were injured earlier Monday.The wounded fisher has been identified as Mohammad al-Bardaweel.

The navy also opened fired on several fishing boats, in Beit Lahia, in the northern part of the Gaza Strip.

Mohammad Bakr, 26, was injured when his boat came under fire by Israeli navy ship near the northern Gaza shoreline. He sustained moderate wounds and was moved to hospital.

According to the Palestinian Center for Human Rights, Israeli have conducted 35 attacks targeting fishermen in Gaza in the month of March alone.