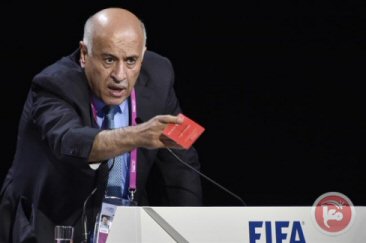 Palestinian Football Association President Jibril Rajoub dropped a bid to suspend Israel from FIFA, just minutes before the bid was brought to the table on Friday.The football governing body voted instead on an amendment proposing the formation of a committee to monitor the movement of Palestinian football players, Israeli racism, as well as the status of Israeli league teams based in illegal Jewish-only settlements in the West Bank.

According to Ma’an News Agency, FIFA members looked on in confusion as last minute bid changes were laid out, and the proposal passed with 90 percent of member nations voting in favor.

Following the vote, FIFA’s visibly relieved President Sepp Blatter said to the congress: ‘Those that have more will share with those who have less. In this case, it is up to Israel to share a little bit more with Palestine. This is what is coming out here.’

Blatter, who had been urging against the Palestinian bid to oust Israel, invited Israeli and Palestinian representatives Ofer Eini and Rajoub to shake hands.

Rajoub insisted the PFA may repeat the threat against Israel if the key issues of racism and player movement in the occupied West Bank are not resolved.

‘Palestine has not withdrawn it’s application completely, but merely suspended it,’ he added.

‘A lot of colleagues, whom I respect and whose commitment to the ethics and values of the game I appreciate, told me how painful it is to hear of the issue of suspension.

‘But I want to protect the Palestinian footballers, to let them enjoy the privilege of the game as others do.’
Rajoub said FIFA must now help tackle the issues facing Palestinian players in the occupied West Bank before waving a red card at delegates to emphasise his point.

‘I think it’s time to raise the red card against racism and humiliation in Palestine and everywhere. It is time,’ he added.

‘An absurd situation’
Israel’s assistant foreign affairs minister Tzipi Hotovely said: ‘The result of talks at FIFA is positive and I welcome the fact that we didn’t arrive at an absurd situation in which a state like Israel would have been suspended from a body whose vocation is, before all, sporting.’

Israeli football chief Eini said separately that it is now up to the Israeli and Palestinian associations to find a common ground to promote football and help each other in the troubled region.

‘Football must serve as a bridge to peace,’ said Eini. ‘I’m saying to my friend Rajoub, let the politicians deal with the political points. Let’s do the best for football on both sides. I want us to work together and to be able to cooperate.

‘We should be able to solve problems by speaking to one another.’

The details surrounding the last-minute changes to the PFA bid — which has been under consideration for the last two FIFA congresses — remain unclear.

The unexpected changes were among a number of missteps to befall the football association’s 65th congress.
Seven FIFA officials were arrested earlier this week for allegedly receiving more than $150 million in bribes.
Blatter’s opening address to the congress, meanwhile, was halted by two female protesters waving red cards at FIFA representatives and chanting ‘Israel out!’ before they were escorted out of the hall by security guards.
Zurich police also reported a bomb threat made to the FIFA congress, causing minor delays.

A bid lost
The bid to suspend Israel over violations of FIFA’s regulations has been championed by the PFA for months.
Up to the last minute, Blatter had lobbied furiously to avoid the vote, travelling to the Middle East last week to meet both Israeli Prime Minister Benjamin Netanyahu and Palestinian President Mahmoud Abbas.

Blatter opposed the vote saying it brought politics into football, and suggesting that Israel had not breached FIFA’s statutes.

Rajoub originally rejected Blatter’s attempt, saying only earlier this week: ‘Our requests are clear, just and fair: Freedom of movement, end of racism and expulsion of all teams from illegal Israeli settlements in Occupied Palestine competing in the Israeli league.’

During the visit, Blatter reportedly proposed a ‘peace match’ between the Palestinian and Israeli national teams, and said he received verbal confirmation from Netanyahu that restrictions on Palestinian players would be eased.

As Blatter and Eini publicly called for the separation of politics and football, routine restrictions placed on Palestinian players by Israeli authorities under the pretext of security has long hindered the Palestinian National Football team’s ability to play.

Despite failing to pass, the bid to oust Israel has drawn attention to personal accounts from Palestinian players.
Current and former players have spoken of hours held at checkpoints, being shot at with live Israeli ammunition, the ongoing restriction of their movement, and rampant racist verbal abuse at football matches that the Israel Football Association has ignored.

Friday’s planned bid to suspend Israel from FIFA was the most recent of many attempts by Palestine and the international community to exert pressure on Israel to change discriminatory and racist policies carried out as part of the ongoing military occupation.