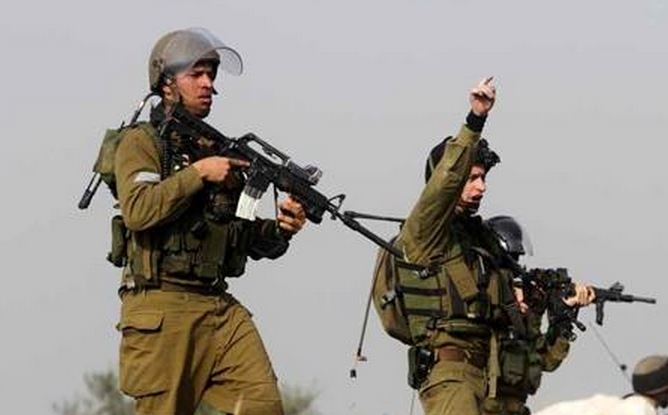 Israeli soldiers attacked, Saturday, scores of Palestinian and international peace activists protesting in front of the Al-Baraka home, near the main Jerusalem-Hebron Road, north of the southern West bank city of Hebron, and kidnapped one Palestinian. The soldiers kidnapped Yousef Abu Mariya, 45, of the Popular Committee against the Wall and Settlements, after attacking him, and took him to an unknown destination.

Soldiers attacked the protesters as they marched demanding the removal of extremist Israeli settlers who controlled on old church property, that was constructed as a free tuberculosis treatment center, known as Beit al-Baraka (House of Blessing) more than 70 years ago on 35 Dunams; it shut down in 1983.

Coordinator of the Popular Committee against the Wall and Settlements Rateb Jabour said the soldiers attacked the protesters, and tried to prevent them from reaching the site, but they managed to advance.

He added that the protest came to express rejection to Israel’s illegal policies and violations against the Palestinians in different parts of occupied Palestine, especially in areas close to illegal Israeli colonies, built on Palestinian property and lands.

It is worth mentioning that a Swedish lawyer, who represents Beit al-Baraka, denied Israeli allegations that the settlers have purchased the property and the lands around it.

The lawyer said the recent maintenance and construction work in the place is part of the owners’ decision to turn the property into a hotel and park, not a settlement. The settler named the property Bet Bracha.

More than a week ago, Israeli newspaper, Ha’aretz, right-wing settler, Aryeh King, has allegedly purchased a compound of an abandoned church, three years ago, and started working on it to create a new outpost.

The new settlement is meant to house at least 20 families in the already refurbished eight buildings, including a large commons structure.

Ha’aretz said that the settlers have been conducting massive reconstruction for the last several months, and built a fence around the compound, challenging an order by the Civil Administration Office in the Occupied West Bank, as no permit was issued for the fence.