Soldiers Kidnap 17 Palestinians In The West Bank And Jerusalem 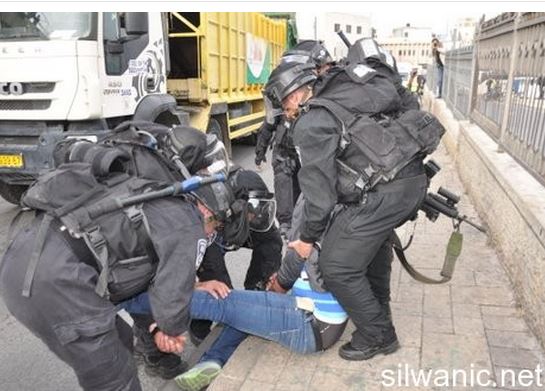 Israeli soldiers kidnapped, late at night and earlier on Tuesday, at least seventeen Palestinians in different parts of the occupied West Bank, including seven in East Jerusalem. The Jericho Office of the Palestinian Prisoners Society (PPS) has reported that several Israeli military vehicles invaded the Ein al-Sultan refugee camp, stormed and searched a number of homes, and kidnapped three Palestinians.

The two are from Saida town, in the northern West bank district of Tulkarem.

In addition, soldiers invaded the Jenin refugee camp, in the northern West Bank city of Jenin, stormed and searched a number of homes, and kidnapped a father identified as Khaled Saleh Abu Zeina, 50, and his son Riyadh, 17.

The soldiers also invaded a residential building belonging to a member of Abu Seriyya family, and a house belonging to resident ‘Akef Shawahin, and violently searched them.

The invasion led to clashes between the soldiers and local youths; the army fired gas bombs and concussion grenades, causing many residents to suffer the effects of tear gas inhalation.

In Surif town, northwest of Hebron, soldiers kidnapped a young university student identified as Taqieddin Jamal al-Hour, 20 years of age, after invading his home and searching it.

Lawyer of the Ad-Dameer Prisoners Support and Human Rights Association Mohammad Mahmoud has reported that the soldiers also kidnapped three Palestinians, identified as Bassem Shweiki, 20, Nassim Shweiki, 27, and Morad Shweiki, 20, after searching their homes, in Silwan town, south of the Al-Aqsa Mosque in occupied Jerusalem.

The soldiers also kidnapped a young Palestinian man, identified as Walid Ferawi, from the African Neighborhood, adjacent to the Al-Aqsa Mosque, while resident Sa’id Abu Nijma was taken prisoner near the Chain Gate of the Al-Aqsa Mosque.

Another Palestinian, identified as Hashem ‘Emad Abu Rmeila, was kidnapped in Wadi Hilweh in Silwan, after the soldiers stormed, and searched him, his home and demolished sections of the property.

Resident Bara’ Ibrahim Hamed, 19 years of age, was also kidnapped from his family home, in Silwan, after the soldiers invaded the building, and searched it.