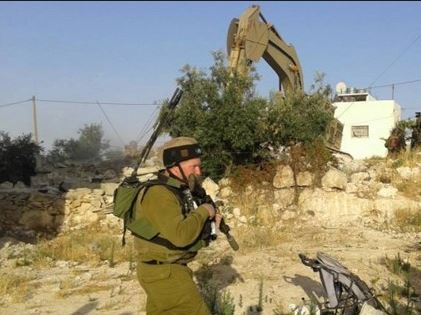 Israeli soldiers and members of the “Civil Administration Office” run by the army in the occupied West Bank, invaded Tuesday Um Salmouna village, south of Bethlehem, and handed orders against four under-construction homes.The army claimed the homes were being built without permits, and informed the families they needed to stop the construction work.

The village is subject to repeated violations and lost large areas of its lands to the military, Israel’s illegal colonies and bypass roads.

Approximately 16.2% Dunams of its lands are isolated behind the Annexation Wall, in the western area of the village.

Approximately 79.8 (1738 square kilometers) of the village’s lands are classified as Area C in the Oslo Peace Agreement, under full Israeli military and administrative control.

Israel was supposed to hand control of parts of Area C to the Palestinian Authority in 1999, and was to withdraw from Areas A and B.

Area C includes fertile Palestinian lands, natural resources and open areas that are supposed to be under the future Palestinian State, but Israel kept building and expanding its illegal settlements, in addition to annexing more lands for its military.

Last year, the United Nations Office for the Coordination of Humanitarian Affairs in the occupied Palestinian territory (OCHA) said 297.000 Palestinians live in 532 residential areas in Area C that represents more than 60% of the occupied West Bank.

Palestinians living in Area C lack basic services, including health-care centers, in addition to ongoing attacks by Israeli settlers, while the army conducts live fire training (in %18 of the West Bank) close to population centers, and the residents largely have insufficient access to basic infrastructure.

The division between the three areas (A, B and C), set under the Interim Agreement of 1995, was supposed to be dissolved in five years, but Israel never implement this important part of the agreement.

Area A, under supposed “Palestinian civil control and police authority, is only %17.7 of the West Bank, while Area B is under Palestinian “Civil Control”, and supposed to be under joint Palestinian-Israeli Security Control.