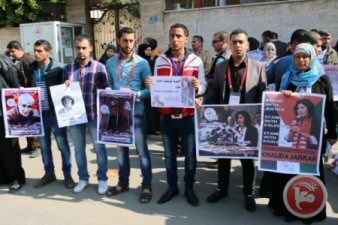 An Israeli military judge reversed a ruling to release Khalida Jarrar on bail, deeming the Palestinian parliamentarian as a ‘security risk’ based on secret evidence, prisoner rights group Addameer told Ma’an News Agency.The ruling came May 28 after an appeal by the prosecution was upheld by the military judge, who made the decision based on secret evidence provided by the prosecution.

Jarrar was initially ordered on May 21 to be released on bail of 20,000 shekels ($5,160) in cash and a guarantee from a third party for the same amount.

The judge ruled at the time that the prosecution had provided insufficient and out of date evidence that Jarrar would be a security risk if released, rights group Amnesty International reported.

The prosecution reportedly told the judge during the May 21 hearing that they would ensure Jarrar remain in prison under an administrative detention order.

As Jarrar has already been charged, the ruling to keep her in military custody comes as a ‘clear form of arbitrary detention,’ Addameer says.

Jarrar was detained on April 2 from her home in the Ramallah neighborhood of al-Bireh. An Israeli army spokeswoman told Ma’an at the time that Jarrar had been detained for being the leader of a ‘terrorist organization,’ and had encouraged ‘terror activities’ in the previous few weeks.

The majority of Palestinian political organizations are considered illegal by Israel, including those that make up the PLO, and association with such parties is often used as grounds for imprisonment, according to prisoners’ rights group Addameer.

Jarrar was elected to the Palestinian Legislative Council in 2006 as a member of PFLP.

Addameer condemned the May 28 decision against Jarrar as ‘vengeful, arbitrary and political, with an aim to punish her for her political opinions and activism for Palestinian human rights, especially in supporting Palestinian prisoners and detainees.’

According to Amnesty International, Jarrar’s legs were shackled throughout the hearing, during which she apparently told foreign diplomats and Israeli and international activists attending the trial, ‘They want to silence our voice but we will continue the struggle against the oppression until we achieve our freedom.

Jerrar’s case comes before a military court on June 22, where Amnesty International says she will face an unfair trial.

She faces up to two years in prison if convicted.