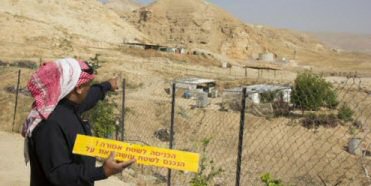 The Union of Agricultural Work Committees (UAWC) today warned from the Israeli civil administration’s project E1, which aims to conduct six structure plans annexed to each other, forming a new settlement, after they relocating the Bedouin Palestinians from their homes near Jerusalem and Nuway’imah, and, therefore, seize their homelands in the C areas, where settlements are already being built.The UAWC in a report showed the consequences of this project, which aims to relocate 12,500 Bedouins from their homes, and isolate them in Al-Ezariyya town south Jerusalem and Izhiman and Nuway’imah in the Jordan valleys, which is considered ethnic cleansing of Palestinians, to expand illegal Israeli settlements.

According to the PNN, the report showed that about half a million dunams of lands will be evacuated, according to the Israeli project which is already being implemented. These areas will be converted into settlements, military training zones, in addition to nature reserves, making it impossible for the Bedouins to return to their homes, in addition to the catastrophe of ripping the occupied West Bank into two halves.

The director of UAWC’s Development and Operations department, Fuad Abu Seif said that the project was a flagrant violation of all the international treaties, including the fourth Geneva convention, in which article 49 quotes:

“Individual or mass forcible transfers, as well as deportations of protected persons from occupied territory to the territory of the Occupying Power or to that of any other country, occupied or not, are prohibited, regardless of their motive.”

The plans will renew the displacement of the Palestinians from their homes, after they were already displaced in the 1948.

For his part, head of Rashaydeh local council in Nuway’imah, Jordan valley, Mohammad Tarif, pointed out that the heads of the local councils presented their objections through Beit El lawyers.

Tarif said that the population of Nuway’imah alone is 400 people who mainly depend on livestock. They were displaced in their hometown in ‘Ein Jedi village near Jericho in 1948, and settled in Deir Dibwan near Ramallah. After that, they were forcibly displaced to Nuway’imah .

He added that the current space left for the Bedouin Palestinians was barely fitting them, adding that it was surrounded by two settlements and military zones and nature reserves, leaving no space for breeding, in addition to the continuous inflation in the forage prices, and deflation of sheep prices.

Moreover, the only water resource they had was in ‘Ain dweik, and was insufficient for them, in addition to the cultural differences which can create a serious crisis.

According to the United Nations Office for the Coordination of Humanitarian Affairs (OCHA) and the UAWC follow up, the project will seize 1460 dunams, in which about 12,500 Bedouins live in 46 communities. The project will “give” about 450 Square meters for every Bedouin family, with restricted permits of use; they can build only one story for housing, and another one of 25 square meters as a forage store for their livestock, which is sufficient and will push them to sell their sheep, and become workers in the settlements, making them consumers instead of producers.