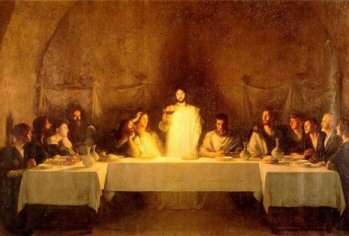 Israeli Jews banned, on Monday, Christian prayer at holy site of Jesus’ Last Supper, calling it “pagan ceremony.”Witnesses said that clashes erupted between the Israeli Jews and Christians –Palestinian and Israelis– when the Christians wanted to perform their prayer.

The extremists said the Christian worshippers were desecrating their holy site and violating the Jews’ right to pray there, but Vatican representatives denied the claims and referred to the incident as “grave.”

According to witnesses from the area of Mount Zion, where is sacred place is located, such incident is always repeated when extremist Jews undermine Christian prayers in the area.

On Sunday last week, dozens of Jews also attempted to block Christian prayer there for the holiday of Pentecost and were forcibly removed.

“Jews come to pray at Zion, at a holy site, a very internal and intimate place,” extremist Jewish Professor Hillel Weiss told Israeli Yedioth Ahronoth on Sunday. “The priests arrive there to forcibly impose their pagan ceremony, in a place which is sacred to the Jews.”

Weiss argued: “This is an intolerable situation. So it was our full right to ward off the invaders. The Vatican is playing with fire.”

The Mount Zion compound near Jerusalem’s Old City includes, according to religious beliefs, the tomb of King David on the first floor and the room of Jesus’ Last Supper on the second floor.

Israeli Threatens To Kill Arab Christians Unless They Leave The Country