Army Kidnaps At Least Thirteen Palestinians In The West Bank 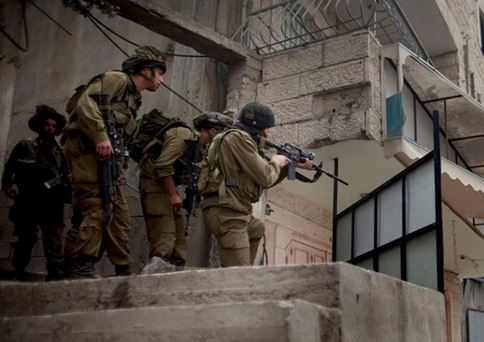 Clashes took place between the invading soldiers and dozens of local youths, while many Palestinians suffered the effects of tear gas inhalation.

Eyewitnesses said the soldiers also fired gas bombs at a number of homes in the town, causing families to suffer effects of tear gas inhalation.

Furthermore, soldiers invaded the home of Taiseer an-Nastsha, and violently searched it, causing property damage, and confiscated some amounts of cash. Taiseer is the father of Ma’moun an-Nastsha, who was killed by the army in 2010.

In addition, the army invaded various communities in the northern West Bank district of Nablus, searched and ransacked homes, and kidnapped three Palestinians.

The three have been identified as Mahmoud Abdul-Qader Jouda, from Iraq al-Tayeh village, ‘Ala Husam Daoud Samara, from Beit Omreen village, and Mo’tasem Ghassan Ahmad ‘Antari, 20, from Deir Sharaf village. ‘Antari is a student of the Najah National University in Nablus.

Soldiers also invaded Beit Rameen village, north of the northern West Bank city of Tulkarem, and kidnapped Jamal Jamil Barham, 54, the head of the Arabic Studies Department of the Palestine Liberation Organization (PLO) and a senior political leader of the Popular Front for the Liberation of Palestine (PFLP).

His wife, Amira Barham, said a large military force stormed their home after surrounding it, conducted extensive and violent searches, and smashed a computer belonging to her college student son.

She added that the soldiers detained her in one room, guarded by two soldiers, and interrogated her husband and children in another room.

It is worth mentioning that the army also said it arrested two Palestinians in the northern West Bank city of Qalqilia, and two in Abu Dis town, in occupied East Jerusalem.

On Tuesday evening, soldiers kidnapped Ahmad Jamal al-Hour, from Hebron; he was kidnapped in the Etzion military base after receiving an order for interrogation, just a few hours after the soldiers abducted his brother Taqieddin.