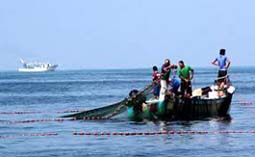 PCHR also expresses its concern over the continued Israeli policy of targeting fishers’ livelihoods in light of the illegal naval blockade imposed on Gaza sea and in conjunction with the sardine season as well.

Moheeb Ahed Baker said to a PCHR fieldworker that at approximately 06:00 on Tuesday, 01 June 2015, he and five other fishers went together for sailing on a fishing boat belonging to Bahjat Baker.

He added that they started fishing four nautical miles off al-Sudaniya shore. They had fished for an hour and a half, but suddenly an Israeli gunboat that was around opened fire at them.

PCHR condemns the violations committed by the Israeli navy forces against Palestinian fishers in the Gaza Strip, and calls upon Israeli forces to:

1. Immediately stop its policy of chasing and arresting Palestinian fishers, to allow them to sail and fish freely, and to return confiscated fishing boats and tools;

2. Pay compensation to the victims of Israel’s violations for the physical and material damage caused to fishers and their property;

3. Release Palestinian fishermen who have been under the Israeli custody; and

4. Calls upon the international community, including the High Contracting Parties to the Fourth Geneva Convention 1949, to intervene in order to stop Israeli violation against Palestinian fishermen.