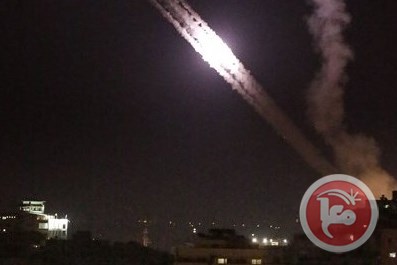 Israel’s military reported, late Wednesda,y that two rockets were fired from the southern Gaza Strip.The Israeli army confirmed reports of rocket-warning sirens going off in Ashkelon and Netivot.
No injures or damage were immediately reported, the military reported.

There was no immediate claim of responsibility from armed groups in Gaza.

Earlier Wednesday, Israeli forces continued near-daily incursions into the Gaza Strip, shooting and injuring one east of Khan Younis and detaining four fishermen off the coast of Gaza City.

Residents of the village of Khuzaa east of Khan Younis said that forces in Israeli watchtowers across the borders with Gaza opened fire at a Palestinian farmer because he came close to the border fence.

The 22-year-old man was in a moderate condition after being shot in the stomach, Gaza health ministry spokesman Ashraf al-Qudra told AFP.

An Israeli army spokeswoman did not have immediate information on the shooting.

An Israeli army spokeswoman told Ma’an that two fishing vessels deviated from the designated fishing zone Wednesday morning. When the vessels failed to respond to warning shots fired into the air by Israeli naval forces, the forces escorted the vessels back to the shore, she added.

Noting multiple alleged attempts of weapons smuggling via boat into the Gaza Strip in recent months, the spokeswoman emphasized that every deviation from the designated zone is considered a security threat.

In a ceasefire agreement between Israel and Hamas last summer, Israel agreed to expand the fishing zone off Gaza’s coast, allowing fishermen to sail as far as six nautical miles from shore and to continue to expand the area gradually, however fishermen are routinely stopped within the zone.

Three Palestinian fishermen have been shot dead by Israeli forces since September.

Risk of death or detention by Israeli forces is compounded by ongoing harassment and interference with their work from Israeli naval forces who frequently confiscate boats and fishing materials.

Israeli authorities also maintain a ‘buffer zone’ along the Gaza-Israel border, however its exact limits are ambiguous. Farmers whose land lies within or close to the buffer zone face near daily fire or threat of fire from Israeli forces, often preventing them from cultivating their crops, rights groups say.

According to Palestinian Center for Human Rights, the buffer zone, which Palestinians are prohibited from entering, ‘is illegal under both Israeli and international law.’