Soldiers Attack Protesters Marking The 48th Anniversary of the Naksa, In Hebron 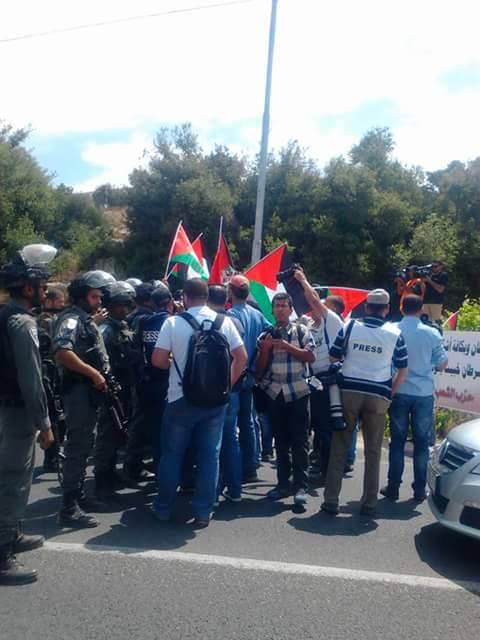 Israeli soldiers attacked, Saturday, Palestinian protesters as they were commemorating the 1967 occupation of the full area of historic Palestine by the Israeli military. The demonstrators tried to reach the Bayt Al-Barakah (i.e. House of Blessing) in front of Arroub Refugees Camp, a building which was built on land belonging to the Palestinian town of Beit Ummar, north of Hebron.The land in question was recently threatened to be confiscated by the Israeli occupation authorities to establish a new settlement. Following the threat, the Israeli military declared the area as a military closed area.

Dozens of activists participated in this demonstration, which was called for by the Hebron Defense Committee, in cooperation with popular resistance committees in the south of the West Bank and the Palestinian Peoples Party, in order to protest against the Israeli intention to establish a new settlement in the area.

They carried Palestinian flags, chanted slogans against the occupation and raised banners with similar slogans.

The Israeli forces prevented the activists from reaching the building and assaulted them, which resulted in bruises and body wounds on a number of the participants. Most of those injured were from Younes Arar area in Beit Ummar.

Yousef Abu Maria, an activist from The Popular Committee of Beit Ummar called upon the popular resistance committees and the Palestinian national forces to continue with such activities in front of the building, so as to foil the intentions of the Israeli occupation authorities for the place.

Activist Rashad Tmeizi said that the demonstration today in front of Bayt Al-Barakah comes to ensure that the building and its land remain part of Palestine, and an unquestionable part of the Palestinian state which was recognized by the International community.

Tmeizi added that the Palestinian people will continue their struggle till the end of the occupation and the return of the refugees to their towns and villages which they were forced to leave in 1948.

Co-coordinator of Hebron Defense Committee, Hisham Sharabati, called upon the Palestinian Authority to initiate an intensive investigation about converting the ownership bargain, as the place used to be owned by an American Church. Recently it was sold to a pro – Israeli settlement associations inside the U.S.

Sharabati warned that establishing a new settlement in the area would endanger the very existence of the Palestinians and the nearby Palestinian agricultural college and school.

In addition, the location of the intended settlement on the main road between Hebron and Bethlehem and the rest of the Palestinian towns and cities will force the Palestinians to search for other routes to reach their destinations.