Israeli Official: Government ‘Out of ways to combat BDS’ 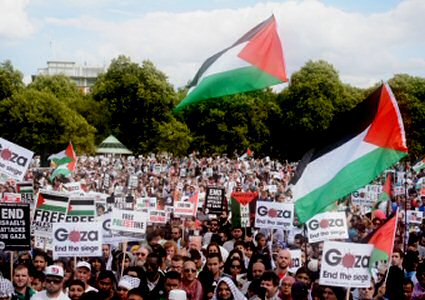 Israeli officials, last week, launched a war against the Boycott, Divestment and Sanctions (BDS) movement, which has been gaining ground in recent weeks.According to thge PNN, Hebrew, international and Palestinian media sources have, this past week, been documenting Israel’s concern over growing support for the BDS movement after a series of unions, groups and companies declared their affiliation to the international boycott of Israel.

Israel’s Channel Ten reported that the decision of Orange company, to end its brand licensing deal with the Israeli firm Partner Communication and quit its operations in the country, has ignited a storm of BDS victories. Success stories kicked off this week with Britain’s National Union of Students’ (NUS) successful vote to affiliate themselves with BDS. NUS on Tuesday passed the motion by a vote of 19-14, with one abstention, to boycott Israel and align with the BDS movement, reported the Jerusalem Post.

BDS calls for an international boycott of Israel based on its policies in the West Bank, Gaza and Jerusalem. The movement has been gaining ground in recent times, most recently convincing the UK company Boots to stop selling illegally-taken Dead Sea mud.

Channel Ten explained that Israel has already begun to feel the effects of the potential damage to the Israeli economy, and an Israeli official warned that the government had run out of ways to combat the BDS threat.

Israeli prime minister Benyamin Netanyahu held a conference in Las Vegas on Friday evening in which he warned participants of the BDS threat to Israel, saying that “we have to fight the delegitimization of Israel. This is a war on our right to live as free people, our right to defend ourselves and our right to determine our future. There is no future for the Jewish people without a Jewish state.”