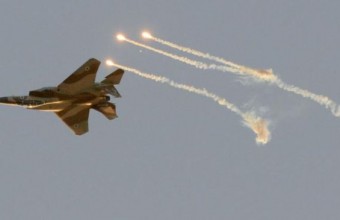 A Salafist group has claimed responsibility for a rocket fired from the Gaza Strip
towards the Israeli town of Ashkelon on Saturday night, as Israel carried out retaliatory airstrikes overnight.
In a statement issued Sunday, the group, calling itself ‘Sheikh Omar Hadid-Bayt al-Maqdis,’ claimed that its fighters had fired a Katyusha 130 rocket at Ashkelon on Saturday evening.The statement is the second released by the group, after another last week claimed responsibility for an earlier rocket fired at Ashkelon.

Saturday’s rocket fell in open ground with no injuries or damage reported.

In response, Israeli jets launched airstrikes on a military training base operated by Hamas’ military wing, al-Qassam Brigades, in the northern Gaza Strip.

Locals told Ma’an that the strike had caused material damage, but there were no human casualties.

There is no evidence that Hamas had any responsibility for the recent rocket attacks. The coastal enclave’s de facto leaders are currently pitched against Salafist groups in Gaza.

Since last summer’s devastating war in Gaza, there have been growing signs of internal unrest between Hamas security forces and other militant groups, with a string of small-scale explosions.

Many of the more recent attacks are believed to be the work of Salafis who have made a name for themselves as unafraid to challenge Hamas, seeking to outbid them in the fight against Israel and the defense of Islam.

Salafis are Sunni Muslims who promote a strict lifestyle based on the traditions of early pious ancestors. While the vast majority of Salafis in Gaza are apolitical, a violent fringe has emerged in recent years.

Hamas has gone after these groups, which it views as a threat to its power in the same vein as extremist groups such as the Islamic State (IS).

See: Another Rocket Reportedly Fired into Southern Israel from Gaza