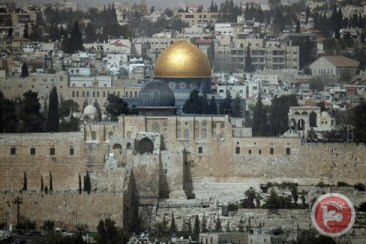 The American president rather than Congress has authority to decide policy on matters of sovereignty such as the US stance on the status of Jerusalem, the Supreme Court ruled Monday.The top court was called to rule on the matter after lawmakers passed a law allowing the passports of Jerusalem-born US citizens to record their birthplace as ‘Jerusalem, Israel’.

Ma’an reports that, in 2002, despite opposition from then president George W. Bush, Congress passed a law obliging the US government to accept this designation upon request.

But, after lengthy deliberations, the court decided that this law ‘infringes on the executive’s consistent decision to withhold recognition with respect to Jerusalem.’

Israel regards Jerusalem — which it has fully controlled since the 1967 Six Day War — as its historic and undivided capital, while Palestinians view East Jerusalem as occupied territory and the capital of a future state.
Washington and the broader international community have never recognized Jerusalem as Israel’s capital and its final status is one of the thorniest issues in the Middle East peace process.

In a decision that had been keenly anticipated since a hearing on the issue in November last year, the court upheld the White House’s right to ignore Congress’ attempt to force the issue.

‘The provision forces the president, through the secretary of state, to identify, upon request, citizens born in Jerusalem as being born in Israel when, as a matter of United States policy, neither Israel nor any other country is acknowledged as having sovereignty over Jerusalem,’ the court said in a ruling presented by Justice Anthony Kennedy.

Six of the nine Supreme Court judges, including the three Jewish members of the bench, backed the ruling, but Chief Justice John Roberts objected.

‘Today’s decision is a first: never before has this court accepted a president’s direct defiance of an act of Congress in the field of foreign affairs,’ he argued.

Bush signed Congress’ 2002 bill into law, but accompanied his assent with a note objecting to the clause authorizing Jerusalem-born US citizens to request ‘Israel’ be written in their passports.

Reacting to the decision Monday, spokesman for the Palestinian presidency Nabil Abu Rudeina said the ruling was ‘in harmony with international legitimacy.’

Abu Rudeina told WAFA news that the decision comes in accordance with the UN Security Council and General Assembly resolutions especially the latest resolution to recognize Palestine as an observer state.
He added that the decision sent a clear message that Israel occupies East Jerusalem, the West Bank, and the Gaza Strip.