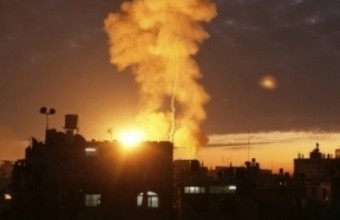 The White House, on Sunday, announced its support for Israel’s missiles on Gaza as the right to defend itself, after rockets were fired from the Strip into Israel by Salafist IS supporters.“Clearly the U.S. stands with the people of Israel as they defend their people and their nation against these kind of attacks,” White House spokesman Josh Earnest, accompanying President Barack Obama at a G7 summit in Germany, Haaretz reported.

According to the PNN, a Salafist group calling itself the ‘Omar Brigades’, adopted the operative on Saturday night. The group said it would not abide by an informal truce agreed between Hamas and Israel after last summer’s 50-day Gaza war, adding that that the rockets were a reminder to Hamas that Israel, not the Salafists, were “the enemy”.

The rockets fired from Gaza were a response to Hamas’ crackdown on them, pressuring it to bind to their demands through Israel.

Defense Minister Moshe Ya’alon also ordered the closure of both the Erez and Karm Abu Salem border crossings between Israel and the Strip.

Israei forces deployed Iron Dome missile defense batteries in several locations in the south during the past week following several incidents of rocket fire from the Gaza Strip toward Israeli territory.

The Salafists in Gaza last Tuesday issued Hamas a 48-hour deadline to stop its crackdown on them, the Associated Press reported. On the same day, Hamas security forces killed an activist of a rival militant group in a shoot-out at his Gaza home, witnesses said.