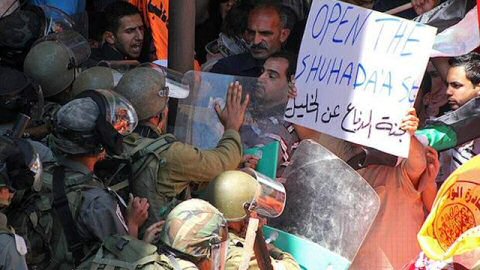 The southern West Bank city of Hebron is a microcosm of the Israeli occupation with its five settlements and 600 settlers, massive military presence, Separation Wall and institutionalised violation of human and national rights of the city’s 160 thousand residents. It is, however, also a microcosm of Palestinian resistance, as local activists struggle against the reality of Israeli colonialism.Hebron is the sole Palestinian city apart from Jerusalem in which Israeli settlements have been constructed inside the heart of the city. 600 Israeli settlers live in five settlements within Hebron’s downtown and are guarded by some 2,000 soldiers. Such a situation renders life in Hebron, especially for the downtown’s 6,000 Palestinian residents, miserable as they are forced to daily navigate military checkpoints, closed roads, shuttered shops, settler violence, exploitation of archaeology for confiscation purposes and the taking over of Palestinian property.

Palestinians have responded to this situation by establishing popular committees which aim to assist Palestinians to remain in Hebron, despite the overwhelming difficulties. The committees increase awareness of the unique situation of Hebron and its residents whilst resisting the ongoing Israeli occupation.

One of these groups is the Hebron Defense Committee (HDC), established in late 2010 when human rights professionals, activists, politicians, academics and victims from downtown Hebron came together. In establishing the HDC, founding activists insisted the group reflect the political and social diversity within Palestinian society, such that it is truly a representative body of Hebron. Gender was also a crucial factor, and numerous women’s committees are part of HDC.

The Hebron Defense Committee struggles against Israeli violations, including settler attacks. It organises marches and demonstrations in numerous areas of downtown Hebron, including Shuhada Street, Tel Rumaida, the area around the Ibrahimi mosque and Jabal al Ras located west of the nearby settlement of Kiryat Arba. Dozens of protests have already taken place this year and HDC members have been beaten and detained on several occasions.

The HDC further assists residents who experience daily human rights violations by organising cultural activities, primarily for children. The aim of these cultural and social projects is to provide a semblance of normality for the besieged residents. In the summer of 2013 the HDC organised a summer camp for pupils from the Qortoba girls school located in downtown Hebron. This summer a camp will be held for children who were victims of settler attacks or arrested by Israeli forces.

HDC has recently expanded its activities to include the entire Hebron district, given the prevalence of Israeli human rights violations and settlement activity in the area. The group organised a solidarity visit to the South Hebron Hills village of Susiya, which is under threat of expulsion and complete demolition by Israeli authorities. HDC further participated in a protest outside of the Baraka hospital near the al Aroub refugee camp, recently acquired by Israeli settlers.

The committee has built strong relations with other Palestinian groups, international activists and anti-occupation Israeli groups.

Under the slogan no to normalisation, yes to joint struggle, the Hebron Defense Committee has held two Palestinian-Israeli conferences in the past four years, as well as organising tours of Hebron and grassroots protest activities in which dozens of Israelis took place, including demonstrations to open Shuhada street. This systematic, ongoing and politically clear cooperation between Palestinians and Israelis is unique in the local landscape.

More news from AIC, via IMEMC.